A big donation is music to the ears of Dallas ISD band members who were robbed of their precious instruments by the winter storm.

DALLAS - A big donation is music to the ears of Dallas ISD band members who were robbed of their precious instruments by the winter storm.

"Panic, first thing is how quickly can I get things out of the water," recalled Lynn Pogue, who is the band director at E.D. Walker Middle School in North Dallas.

Pogue explained how burst pipes during the February storm changed their tune.

"The entire band hall was probably standing in 3-4 inches of water," she said. "When you are talking woodwind instruments, wood soaks up the water, they swell up, it ruins the instrument."

Anderson Hewitt feared the worst after water had seeped into his trumpet case.

"I knew that I probably wouldn’t get another one because we had so few good trumpets left," the 7th grader said.

But the band will soon play again with the help of a giant check. 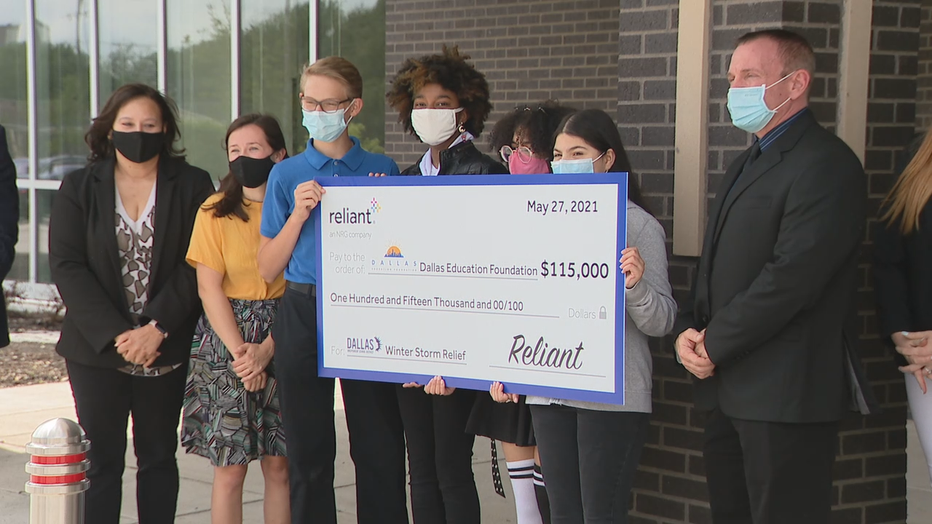 Electricity provider Reliant Energy stepped up by reaching out to the Dallas Education Foundation, DISD’s philanthropic arm, much like it did after the 2019 tornadoes.

"Reliant was one of the first phone calls the foundation received, and they said, ‘What can we do to help,’" said Mita Havlick, with the Dallas Education Foundation.

This time, they asked the district to tally up the cost to replace things like, band uniforms, sheet music, instruments, and cases at the five schools hit hardest, and they would replace items the district’s insurance doesn’t cover.

"This won’t just affect our kids for the next couple of years, this will affect kids and families for next 20 years," Pogue said.

The district said replacing the damaged performing arts items is one of the last things it needed to do to finally put this winter storm behind them.

"Of the 140 leaks and stuff that happened in our buildings, every single one was fixed within the week," DISD Trustee Edwin Flores said. "And I think there was just one school that took longer because the damage was so extensive."

The district getting back in step after a merciless school year. For band, it’s ending on a high note.

"I’ll be completely ecstatic to play with the band because they are like my family," 8th Grader Tyler Walker said.

"Every instrument I see, I see a kids face behind it. It’s just huge," Pogue added.