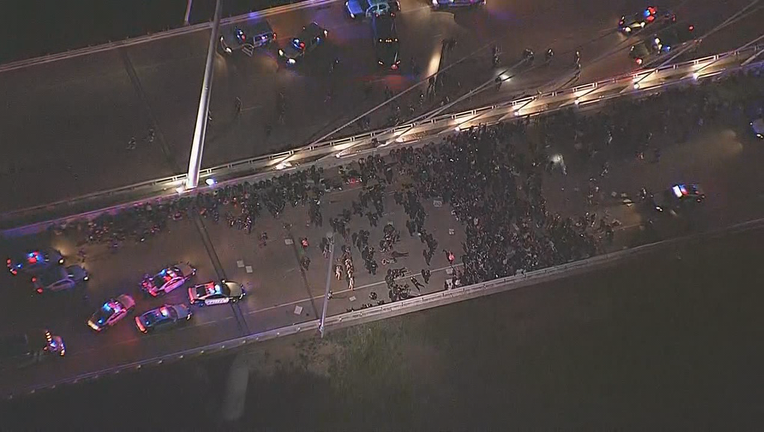 DALLAS - In a turn of events, Dallas Police Chief Renee Hall announced Thursday the protesters arrested on the Margaret Hunt Hill Bridge in West Dallas will not face at-large charges.

After a peaceful protest at the Dallas County courthouse, a group of about 600 protesters Monday began marching and made their way onto the bridge. That was when they were met by law enforcement and ultimately detained.

Chief Hall says the decision to not file charges was made after consulting with City Manager T.C. Broadnax and other city leaders.

“I strongly believe we made the right decisions to deter and disperse the large crowd on the bridge,” said Chief Hall. “We had to protect the protesters from vehicular injury on a roadway still open to traffic. It was critically important to process protesters and then safely reopen the bridge.”

“I agree with Chief Hall that this is the right decision at the right time. This week the protests have been peaceful and I was truly moved to see our officers taking a knee at yesterday’s event,” Broadnax said. “Now is the time for collaboration and compassion not confrontation.”

However, both leaders emphasized that DPD will still move swiftly to arrest any looters or vandals.

“Today’s decision is not permission to damage businesses or commit this kind of action in our city,” said Hall. “If you break the law, especially serious acts such as brick-throwing, looting, Molotov cocktails, as well as behavior that risks the lives of peaceful protesters as well as our officers, you will be arrested because we will not tolerate that kind of behavior.”