Glass bottles magnifying sunlight in an open trash can ignited paper and other items in the trash which then spread into a 500-acre wildfire that destroyed eight homes at Possum Kingdom Lake last week.

Glass bottles magnifying sunlight in an open trash can ignited paper and other items in the trash which then spread into a 500-acre wildfire that destroyed eight homes at Possum Kingdom Lake last week.

The Possum Kingdom West Volunteer Fire Department released the cause of the fire in an open letter to the community.

Fire Chief Bonnie Watkins made the discovery last week while investigating the cause of the wildfire. She says the fire vented out of the side and top of the trash can and then ignited nearby cedar trees.

"If you would have put a rock on top of the lid on that trash can, it never would have opened. There would never have been a fire," she said.

Investigators believe a gust of wind blew the lid off a trash can. Inside, there were glass bottles stacked on top of what she calls "party trash."

"The paper, uneaten food, plates, paper towels, all that kind of stuff, paper cups," she said.

With just the right amount of intense summer sun magnified by the glass bottles, the trash caught fire. From there, Chief Watkins says it really doesn’t take long for a fire to get going.

She says flames started venting out of the trash can, then spread to nearby cedar trees and eventually spread across 457 acres, destroying five homes and at least five additional structures.

"The big flames and trees burning, that’s out. But we’re still running up and down this mountain covering rekindles and flaming trunks of trees," she said.

And under these conditions, Watkins says her team plans to continue monitoring the region for at least another month. 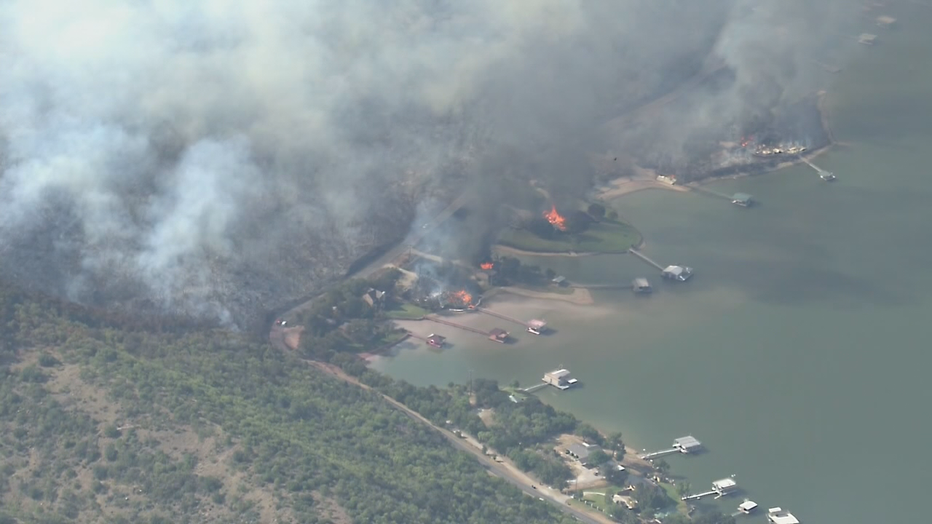 Adam Turner with the Texas A&M Forest Service says much of North Texas remains under a high fire danger.

"With how dry conditions are, fires can start based on a really small seemingly un-dangerous action," he said.

Take Monday’s fire in Balch Springs, which was sparked by a crew mowing an overgrown field.

And on Tuesday, three homes were destroyed by a fire sparked inside of a kitchen.

"The smallest spark can land somewhere and catch a fire if it lands in the right stuff," Turner said.

Turner warns it’s critical that people pay closer attention to their outside activities,  especially as fire seasons continue to get worse and worse across the state and the western United States.

"Until we get long term moisture, we are going to continue to be in a wildfire season. Our protective services are talking October and potentially November," he said.

The fire department is calling the fire accidental and says simply separating glass from the other items and securing the lid — which blew off the can — would have prevented this fire.