Firefighters are still struggling to get control of this 500-acre wildfire near Possum Kingdom Lake that burned down several homes. As of Tuesday, evacuations are only voluntary.

Firefighters are still struggling to get control of this 500-acre wildfire near Possum Kingdom Lake that burned down several homes.

As of Tuesday, evacuations are only voluntary.

A panicked Sharon Benson took a video rushing to check on her 88-year-old father when a wildfire broke out near his home on Possum Kingdom Lake on Monday afternoon.

"You would think that if it wasn’t a fire. It was a small city of lights," she said.

Teddy Robertson says his power went out. So he stepped outside and watched the flames grow just north of the lake. 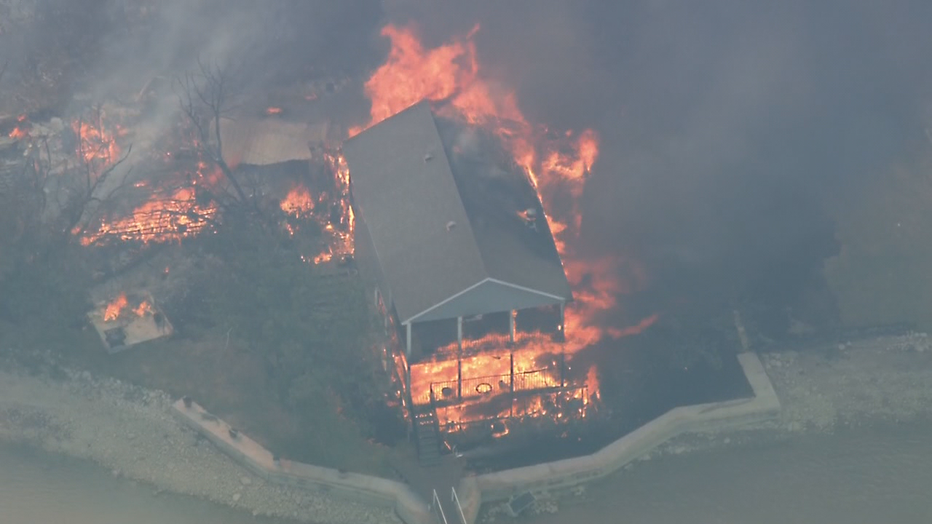 "I just saw a fire coming over the mountain," he said. "I hope the wind don’t change in my favor."

Though reluctant, Benson convinced her father it was time to go.

"Thankful that I’ve got my dad, and I can touch him and see him. And we can drive out together," she said.

Around 2 p.m. on Monday, roughly 300 homes were evacuated. That includes everyone east of Chapel Road along Possum Kingdom Lake.

Around 5:30 p.m., the fire jumped across FM 1148, inching closer and closer to hundreds of homes just north of the water.

One of those residents is Susan Nance. Her husband is a volunteer firefighter. He told her their neighborhood was no longer safe. Her home was untouched. But just a few doors down, at least five homes burned along with five outbuildings.

"Nobody was in the area when the structures caught on fire because it was making such a hard push," said Adam Turner with Texas A&M Forest Service. "Firefighters left the area to be in their safety zones in case something did happen."

Overnight, an Infrared flight flew over the area and mapped the perimeter of the fire to assist crews as they continued to construct a containment line. But they struggled to get the fire contained on Tuesday with strong breezes and very hot temperatures.

The Forest Service says around 4 p.m. Tuesday, the fire intensified. Several large trees were completely engulfed in the flames.

Firefighters are still working to put out smoldering hot spots. Their biggest challenge is the intense heat- the relentless weather with a heat index just shy of 110 degrees.

Texas A&M Forest Service says a team of 16 is working with local firefighters to get it contained. About 10 dozers are working at northern edge of the fire to create enough space for engines to get access.

"It does provide challenges," he said. "But we’ve been fighting fire since long before aircraft was used to dump water. Sometimes you have to go back to basics."