Dallas Police Chief Renee Hall said officers will be out in full force Saturday, as there are two more protests scheduled.

Hall and Dallas Mayor Eric Johnson spoke at a press conference Saturday afternoon, and condemned the people who looted and vandalized businesses in downtown after a protest was held over the death of George Floyd.

Dallas police said one officer was injured Friday night. However, his injuries were not life-threatening.

Hundreds of peaceful protestors were out Saturday afternoon in Dallas. 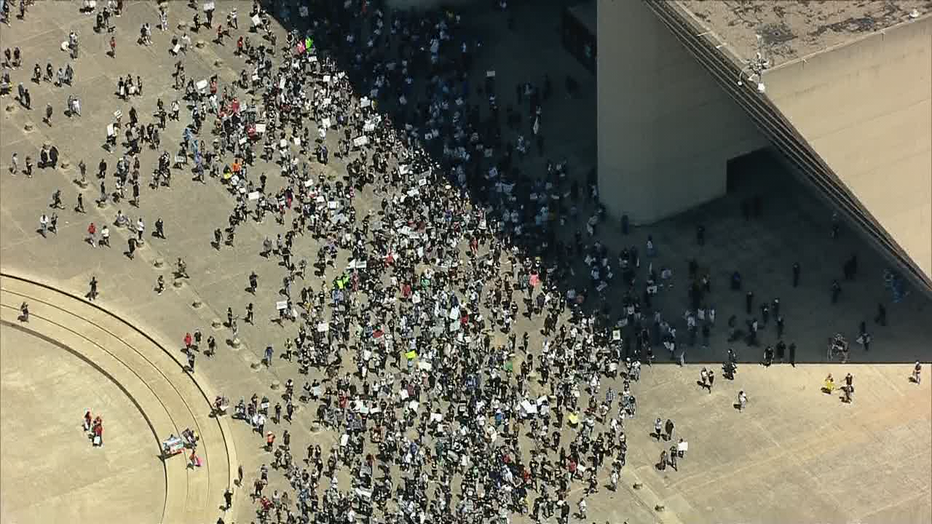 Police are tweeting updates about the protestors' march, and there were no incidents reported until 4:30 p.m., when officers used gas to "disperse the unruly protesters" at the corner of Young and Akard streets.

Just before 7 p.m., some people blocked traffic near I-45 and Commerce for a few minutes.

As of 10:45 p.m. Saturday, Dallas PD had made 74 arrests. They will be charged with inciting a riot.

Texas Governor Greg Abbott said that he will deploy state resources to Dallas and several others Texas cities to maintain public safety and ensure peaceful protests.

Galleria Dallas will be closed Saturday "in order to preserve public safety," and NorthPark Center closed at 2 p.m. "out of an abundance of caution."