Protesters in Dallas took to the streets Friday to demand justice for George Floyd's death. After the rally, some people decided to vandalize parts of Downtown Dallas.

DALLAS - Protestors in Dallas and Fort Worth took to the streets Friday night. And after some people went home, others decided to vandalize parts of Downtown Dallas.

What started out as a peaceful protest turned into a violent one. As the night went on, things escalated. Protesters looted several stores and set fires trying to get the attention of the police.

Thousands of protestors initially started out at the Dallas Police Department headquarters building Friday evening, taking a stand against police in the wake of George Floyd’s death by an officer in Minnesota.

The Dallas group held a rally and marched through downtown. Then around midnight things started getting violent when a small group broke off and surrounded a police vehicle, taunting police.

At one point, glass was thrown at the vehicle. Officers then used what was likely tear gas to disperse the crowd.

Another group then walked onto the freeway and blocked traffic on Interstate 35. Police were able to get the crowd off the main highways before they made their way back to downtown.

A group of protesters blocked freeway traffic near downtown.

Video shows the aftermath of vandalism at the Neiman Marcus store downtown. Protestors used items like bricks to bust out the front store windows.

Police were left manning the store as glass covered the sidewalk, hoping to prevent looting and further damage.

It was just the first of several stores that were hit overnight with some arrests being made.

Protestors also set trash bins and dumpsters on fire in the middle of Commerce Street. Police patrol cars surrounded the area and then Dallas Fire-Rescue showed up to put out the flames.

People watched, taking pictures and videos of the damage.

During the protests, Dallas police say one officer was injured. However, his injuries were not life-threatening.

Mayor Eric Johnson said he was aware of the protests and asked them to remain peaceful.

Before the protest, the Dallas Police Department said their officers would not interfere with a peaceful assembly.

"The Dallas Police Department will not interfere with a lawful and peaceful assembly of any individuals or groups expressing their first amendment rights. The Dallas Police Department will take enforcement action if any type of criminal offense is committed against any person or property. Enforcement action will also be taken if any individuals or groups illegally impede traffic in the roadway," the department said in a statement. 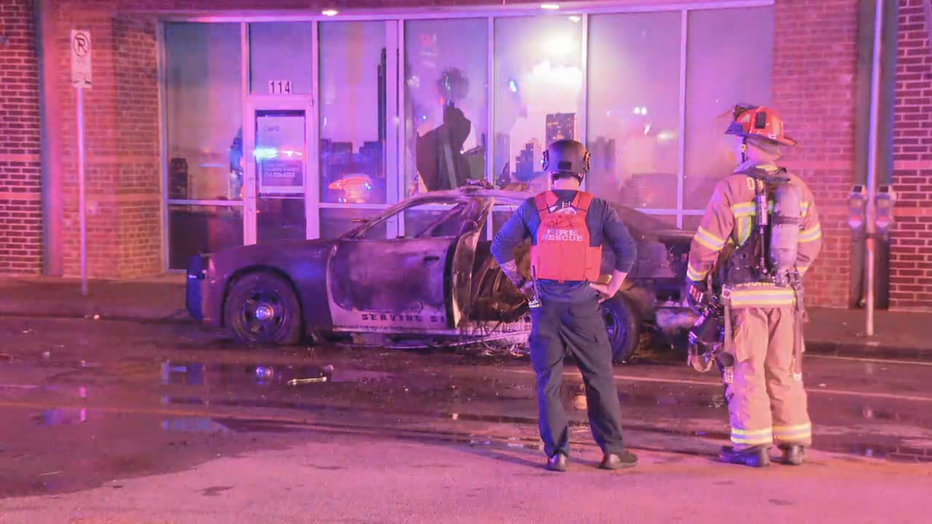 A smaller group of about 100 people marched in Fort Worth but remained peaceful.

Demonstrators in Fort Worth demanded justice for the death of Floyd. Some protestors chanted while lying on the ground to make their point.