Dallas police say someone flagged down officers after they saw someone trying to sneak a gun into the stadium through a fence. A 17-year-old, who wasn't a student at either school, was found with the gun.

DALLAS - Richardson ISD says its safety and security protocols worked when a 17-year-old was arrested with a gun during a football game on Friday.

It happened in Dallas at a game between Lake Highlands and Richardson Berkner high schools.

Dallas police say someone flagged down officers after they saw someone trying to sneak a gun into the stadium through a fence. A 17-year-old, who wasn't a student at either school, was found with the gun.

There are metal detectors at the games, but Dallas police say a gun was passed through a fence line of the stadium to avoid them. Now, a 17-year-old is facing a felony charge.

High school football stadiums are typically a place to see live action on the field. But at Lake Highlands’ Wildcat-Ram Stadium Friday night, off-the-field drama led to a 17-year-old being arrested. 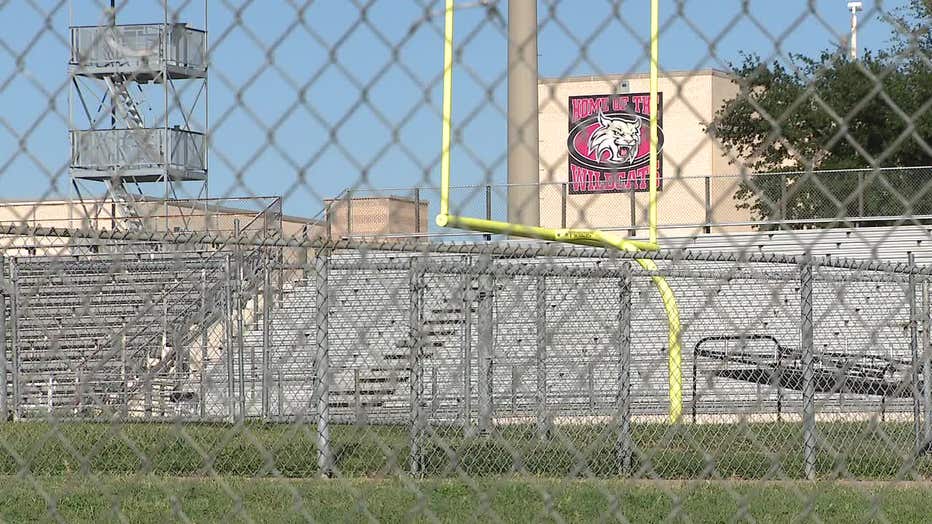 According to Dallas police, someone at Lake Highlands’ home game against Berkner High noticed a gun being passed through a fence at the stadium. They spoke up to security who alerted police.

Susan Hernandez, a grandparent of a Lake Highlands freshman, is glad someone spoke up.

"‘Snitches get stitches’ is what I’m hearing, and that’s not something I believe in," she said.

17-year-old Marktavis Hicks was detained and handcuffed. Police say as he was being walked out, a handgun fell out of his pants. He’s charged with unlawful carrying a weapon in prohibited places.

Richardson ISD says the 17-year-old was not one of its students and may have been trying to bypass metal detectors at entrances.

The district has a clear backpack policy and signs showing it’s illegal to have a firearm on campus. It has police officers, security guards and event staff at games.

Guns at school events are an obvious red flag to parents.

"Concerned because there had been some other incidents I’ve read about in the news," Hernandez said. "And then I thought, ‘Oh, no. Not here.’"

Less than two weeks ago, two teens were arrested at Everman High’s football stadium as police say there were trying to bring in an AR-15 pistol and shoot multiple people.

Last week, a student at Keller ISD’s Timber Creek High School in Fort Worth was found with a gun and ammo while at school.

It’s unclear why Hicks allegedly had a gun at the Lake Highlands game, but Hernandez, who’s a retired teacher of more than 30 years, says gun drama on campus is foreign to her.

"Not when I was teaching," she said. "I mean people sort of did their things with their fists and things like that more. This gun thing is just sort of new."

The district sent emails to parents late Friday about the incident.