A crowd of people gathered in Frisco Saturday afternoon, choosing to ignore social distancing practices. They believe reversing the fall of the state’s economy is the top priority.

FRISCO, Texas - Texas Governor Greg Abbott is expected to cut back parts of his coronavirus order on Monday.

It’s not yet known exactly what will be announced, but in the meantime, there's an emotional debate surrounding health concerns and economic needs.

A crowd of people gathered in Frisco Saturday afternoon, choosing to ignore social distancing practices. They believe reversing the fall of the state’s economy is the top priority. 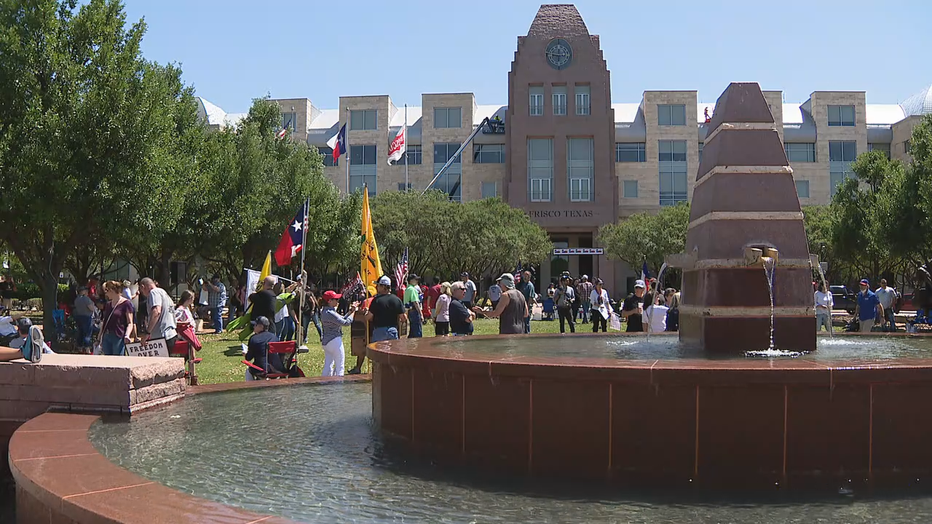 “And if they want to lock those doors, I’ll put chairs out here and my stylists can work out here on the patio, gladly,” she said.

She was served a citation from the city of Dallas, and a cease and desist letter from Dallas County Judge Clay Jenkins on Friday. Still, she said she’s not leaving.

A line formed before she opened again on Saturday. It’s unclear what actions officials will take.

“Everything’s been vague because they’re all looking at each other saying, what do we do, because this is unprecedented,” Luther added.

She’s had steady lines of support.

“She’s, you know, fighting the good fight for all of us,” customer Lynne said. “As a business owner, every single day matters. It’s utterly agonizing to look at a pile of bills and get more bills and know that you’re getting further and further behind.”

But many are wondering if it’s time to ease up on state and local restrictions in the fight against COVID-19?

“I don’t think we realized how severe it was until it hit home,” Corey Ripe said.

Ripe, of Mansfield, was diagnosed with COVID-19. His fiancé said that at first, his only symptom was a sniffle. It was followed by difficulty breathing.

Her daughter said the drastic change was instant.

“I came into the room and Corey was just taking a nap and I didn’t think anything of it, and then an hour later, I walked in and he couldn’t breathe at all,” Jillian Parris said.

He spent a week in the hospital, and four days on a ventilator. His fiancé said he nearly died.

“I honestly got on my knees and prayed,” Jenna recalled.

They believe it’s a miracle he survived.

“You know, it’s nothing to mess around with,” Corey said.

They also understand the polarizing debate of weighing health and economic hardships.

“But we can’t live in fear either,” Jenna added.

Over at the salon, Luther said they are cleaning and practicing social distancing

“We sanitize every station, the clippers, the scissors, in between clients,” she said. “We’re only allowing one client in at a time. We have people sitting in six-feet social distance chairs outside.”

But Gov. Abbott has said the CDC had made it clear that salons and gyms are the most dangerous places right now.

An opening of the economy in some shape or form, or a decision that now just isn’t the time to slow down social distancing.

Officials for the city of Dallas said they’re working to figure out a plan regarding the salon owner breaking orders.

FOX4 has reached out multiple times to Judge Jenkins' office, but their response was that they have no additional information at this time.