On Your Side: Fraudulent Returns

According to the National Retail Federation, for every $100 of returned merchandise accepted at a store, retailers lose almost $6 to return fraud.&nbsp;&nbsp;&nbsp;&nbsp;&nbsp; It’s a lesson a Lake Highlands woman learned the hard way twice.

DALLAS - According to the National Retail Federation, for every $100 of returned merchandise accepted at a store, retailers lose almost $6 to return fraud.

For Stephanie Gustafson, renovating her new home has been a labor of love.

"We have painted everything. All new flooring. Got rid of the popcorn ceilings," she said.

And Gustafson upgraded the technology.

"This is the Nest thermostat, which is really cool," she said.

The high-tech silver stunner is exactly what she wanted — almost.

"I wanted white. I did not want silver, but you couldn’t find white anywhere in the Metroplex other than McKinney, Texas."

Gustafson drove the 30 miles north to Bed, Bath and Beyond, where they had white ones in stock. After driving 30 miles back home, she found a surprise.

"It's saran wrapped, so you don’t think twice. Right? It’s saran wrapped. It’s good," she recalled. And then I opened it up, and it was wadded toilet paper and a canned good. And I was just like, ‘What?!’"

It's a story Gustafson chronicled on her Instagram account. She called the store immediately and told them what happened.

Determined to decorate with white, Gustafson got back in her car for a second hour-long round trip to make the exchange. The store manager handed her another sealed box

"So there's now at this point probably 10 people around, and she opens it up and it's another canned good!" she said. "Everyone around was like, ‘What?!’ It was the same reaction I had in my kitchen." 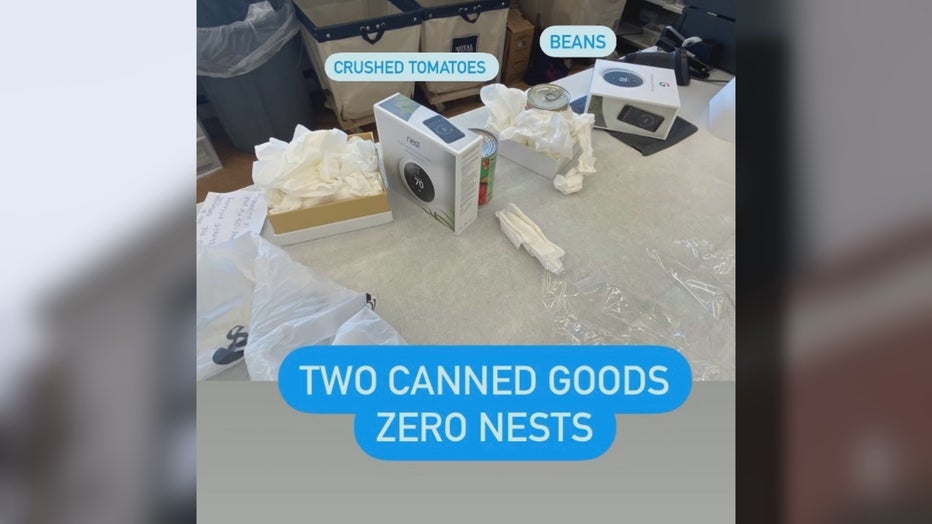 FOX 4 reached out to the corporate team at Bed, Bath and Beyond. A company spokesperson said preliminary findings from their loss prevention team point to previous fraudulent returns.

According to the National Retail Federation, return fraud is on the rise with more than $25 billion worth in 2020.

It’s possibly due in part to the lack of in-person transactions during the COVID pandemic, leaving fraudsters feeling emboldened since they don't have to try and pass off a bogus bring back face-to-face.

Gustafson says she doesn't blame the big box retailer but adds she'll now do an extra inspection of every box she buys.

The folks at Bed Bath and Beyond did fix that. They sourced and shipped a white Nest thermostat to Gustafson at no cost to her and also credited her MyFunds account.

A reminder: carefully inspect what you buy. Both of the boxes in this story had what looked like a factory cellophane seal.