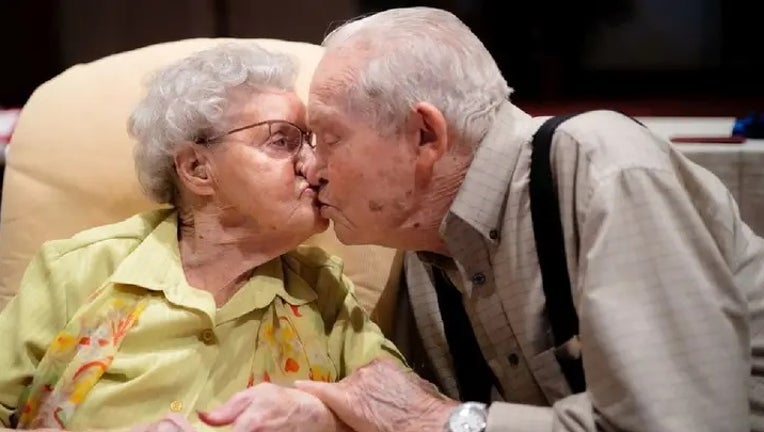 June and Hubert Malicote are still in love after 79 years of marriage. "I’ve always said that a happy home is where God is," said Hubert. (Photo courtesy Melanie Malicote Photography)

Family, friends, neighbors and church members joined the couple on Friday, July 15, at the Eaton Road Church of God in Hamilton, Ohio, where a joint birthday party was held from 4 p.m. to 7 p.m.

Roughly 130 guests stopped by to celebrate with husband and wife.

"We just kind of live by the day and all of a sudden we're 100 years old," Hubert Malicote told Fox News Digital in a phone interview.

The longtime couple first met at the Eaton Road Church of God in 1941, which was under a different name at the time. 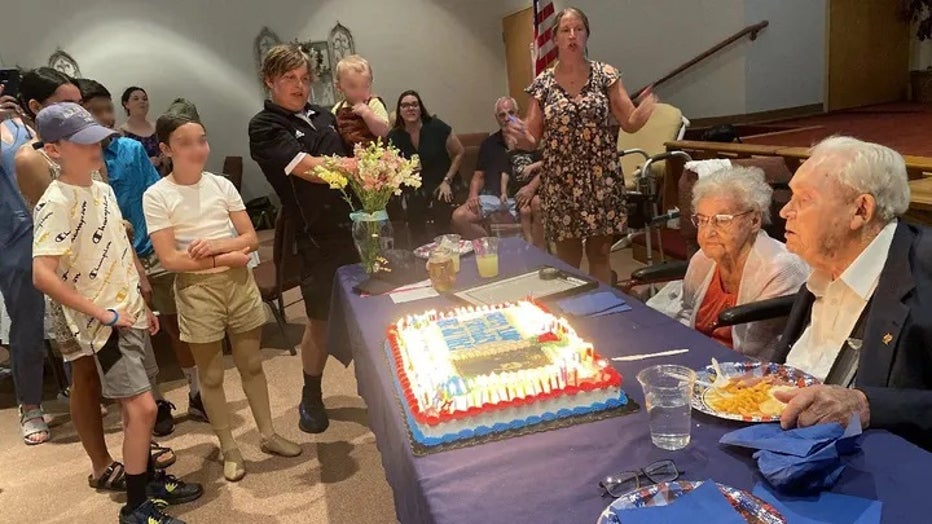 June and Hubert Malicote celebrated their 100th birthday with a joint birthday party on Friday, July 15, hosted at the Eaton Road Church of God in Hamilton, Ohio. (Photo courtesy the Malicote family)

It was in September of that year that they attended a church revival with their respective friend groups.

Hubert had been sitting in the pew behind June — and at one point she looked back at him and smiled. He was smitten.

"After the service, down the street … was an ice cream parlor, so all of us young people went to the parlor, got ice cream and talked and had a nice little afternoon together," Hubert recalled. "There were no automobiles or anything. So, she went her way, and I went mine. I kind of thought about how I would make contact. And I decided that church was the best place."

"I was just barely 19 and kind of a country boy. And I thought, 'She's looking pretty dressed in red.'"

"So come Sunday, I went to church, and she was there," he continued. "We sat together and talked and had a good relationship."

They repeated the routine for a few weeks — and their first official date was at a local county fair. Hubert said he remembers sharing his first kiss with June after the fair at June’s home.

"I didn't really know what to do," he said. "I was just barely 19 and kind of a country boy. And I thought, 'She's looking pretty dressed in red.'"

He added, "I reached over and hugged her a little bit and gave her a kiss." 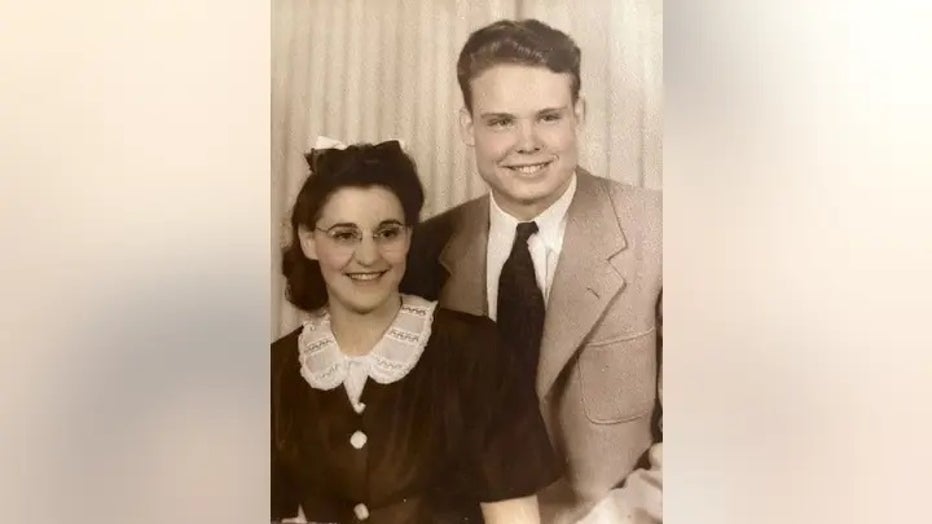 June and Hubert Malicote began dating at age 19. Their love story began in the 1940s in Hamilton, Ohio. (Photo courtesy the Malicote family)

He was so nervous about their kiss that he immediately ran out the door.

Naturally, he worried about whether June was mad about his impromptu flee. His mind rattled with thoughts throughout the week.

When he saw June again, there was "no animosity" and "all things were good."

Their friendship and romance continued to blossom for a year.

In November 1942, Hubert enlisted in the U.S. Navy to fight in World War II.

He did his training at the Naval Station Great Lakes in Illinois and later went to Newport, Rhode Island, for five months of torpedo school.

June stuck by his side and supported the war effort by building war goods at a machinery company in Ohio.

"Time was going fast. We needed to make a decision about what to do," Hubert said. "We decided it was time to get married." 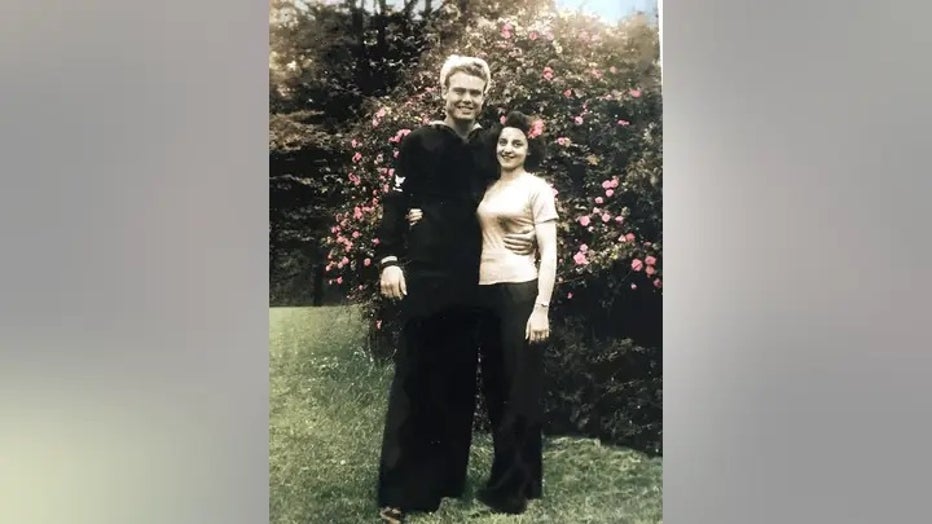 Hubert and June Malicote got married in 1943 before he was deployed by the U.S. Navy. (Photo courtesy the Malicote family)

With little time to waste, the couple made an overnight trip to Indiana to get a pre-marital blood test, which was a marriage license requirement at the time.

They immediately traveled back to Hamilton, so they could get married at the church where their relationship first began. June borrowed a dress from a cousin and fashioned a bouquet of roses out the church’s climbing rose porch.

Their pastor pronounced them husband and wife on June 8, 1943. 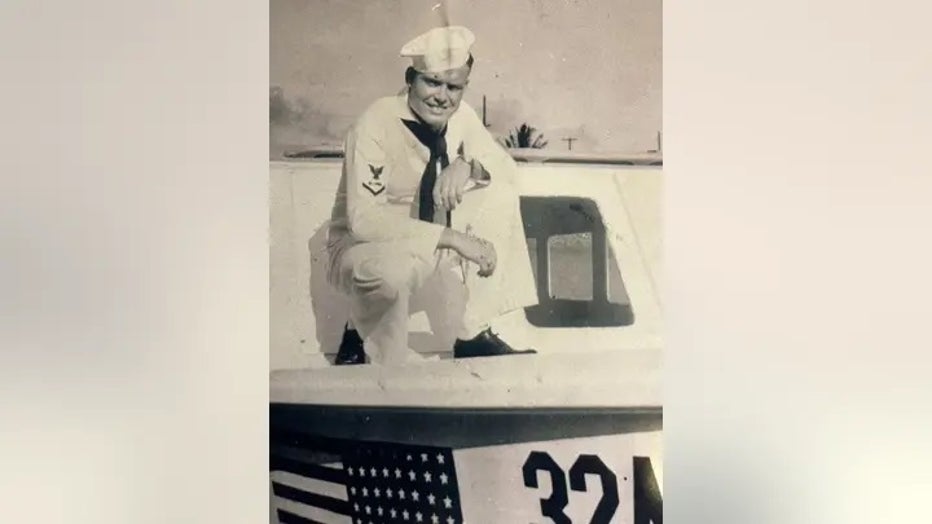 Hubert Malicote served in the U.S. Navy during World War II. He enlisted in 1942 and returned home in 1945. (Photo courtesy the Malicote family)

Shortly after their intimate wedding, Hubert had to board a cross-country train for his deployment. He went from San Francisco to Honolulu.

He was stationed at Pearl Harbor and worked on torpedoes and submarine serpents for two years.

"We were not allowed any telephones or telegraphs — any kinds of communication that would identify where we were," Hubert told Fox News Digital. "One evening walking through the commissary, and there on the wall was a grass skirt."

"It's been a very, very happy marriage."

"That kind of hit me with the idea," he said.

"If I could ship that back to [June], that just might give her some indication where I was. So, I packaged it up and shipped it to her and about two or three weeks [later], I got back a beautiful lady in a grass skirt. Well, that message went through, and we got the answer." 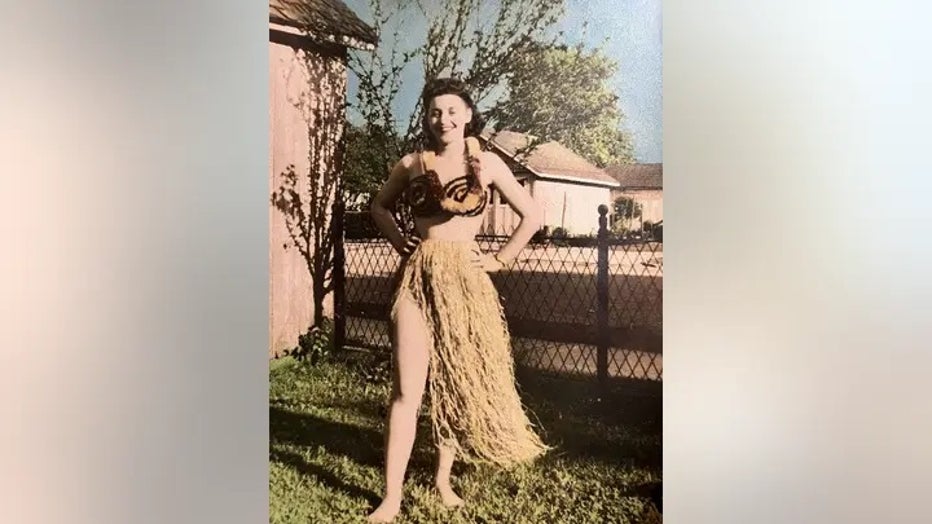 June Malicote donned the grass skirt Hubert Malicote sent her while he was stationed in Hawaii during World War II. This is the photo she sent him back. (Photo courtesy the Malicote family)

After Hubert concluded his service in 1945, he boarded a train home from San Diego.

"I sent a telegram to my wife [about] when I would be home," Hubert said. "As we pulled into the station in Anderson, Indiana, there was nobody on the platform. But walking along beside the train longer track was that beautiful little girl again, dressed real nice and beautiful. And the conductor said, ‘She's waiting for you.’ That was a good arrival."

The pair reunited, built their home on a five-acre ranch and raised three children, Jo, Sam and Theresa, who are all adults now.

"Now they're married and raising their families," Hubert said, noting that he and June have seven grandchildren and 11 great-grandchildren.

"It's been a very, very happy marriage," he added.

June agreed that her marriage to Hubert has been great and they’re highly compatible.

She spoke intermittently due to a speech limitation due to a stroke she had two years ago.

"[It’s been] so easy to get along together," June said. "We have not even had a quarrel."

Their daughter, Jo Malicote, confirmed to Fox News Digital that she can’t recall a single time her parents have uttered a harsh word toward each other.

"We maybe have had disagreements. But we've always worked them out," Hubert said. "Our attitude has been that you don't hurt the one you love. And if you have an issue or quarrel, take care of it, don't let it grow, think it over, talk it out and solve the problem and go on with your life."

June, on the other hand, said keeping the peace was an easy thing to do since her husband is handsome. 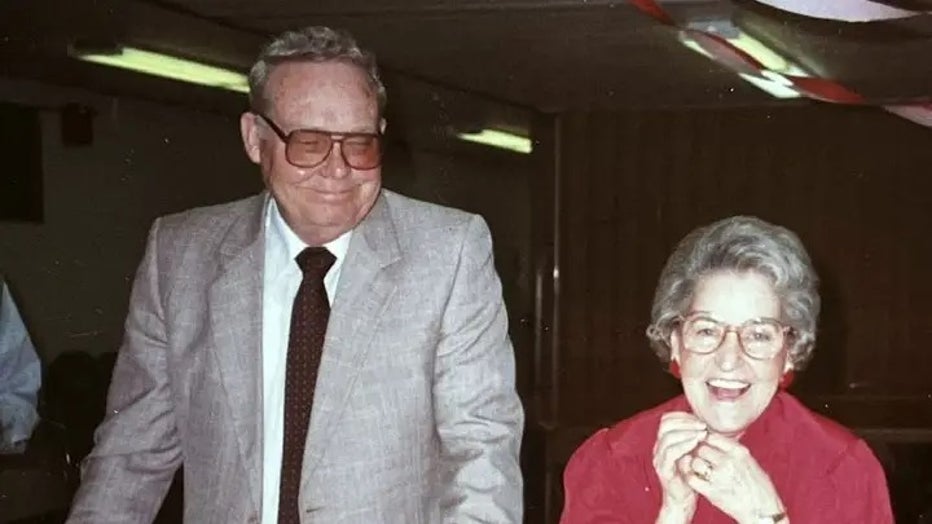 Hubert and June Malicote say they've never had a single quarrel during their 79-year marriage. (Photo courtesy the Malicote family)

The Malicotes are fixtures at their church and have each served in various teaching positions.

"My wife, with her music background, has been a choir director making cantatas for Christmastime, and she's done a real good job with it," Hubert said.

"I’ve always said that a happy home is where God is," he continued. "It’s just been a good life. Good teamwork. A good home."

So far, the couple doesn’t have a special birthday wish. They did blow out 100 birthday candles on their cake with help from their grandchildren and great-grandchildren. 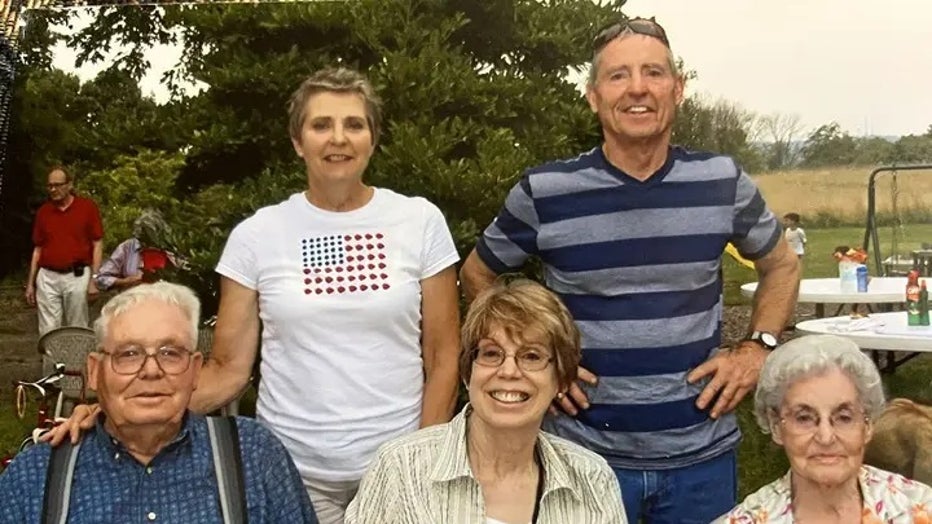 Hubert said he’s not sure why he and his wife have been fortunate enough to share their 100th birthday together — but their daughter Jo said it’s likely in their genetics.

Both June and Hubert’s families hail from Kentucky; their parents passed on their agricultural know-how.

"We maybe have had disagreements. But we've always worked them out. Our attitude has been that you don't hurt the one you love."

"We raised chickens. Dad had his own beef cattle and we had our own meat, whether that was pork or beef or chicken," Jo said.

"Mom had several big gardens, and so we had green beans, corn, beets, lettuce — any vegetable that you could think of. If it grew in Ohio, we had it. And Mom canned it or froze it or dried it. So, we ate healthy before it became a thing." 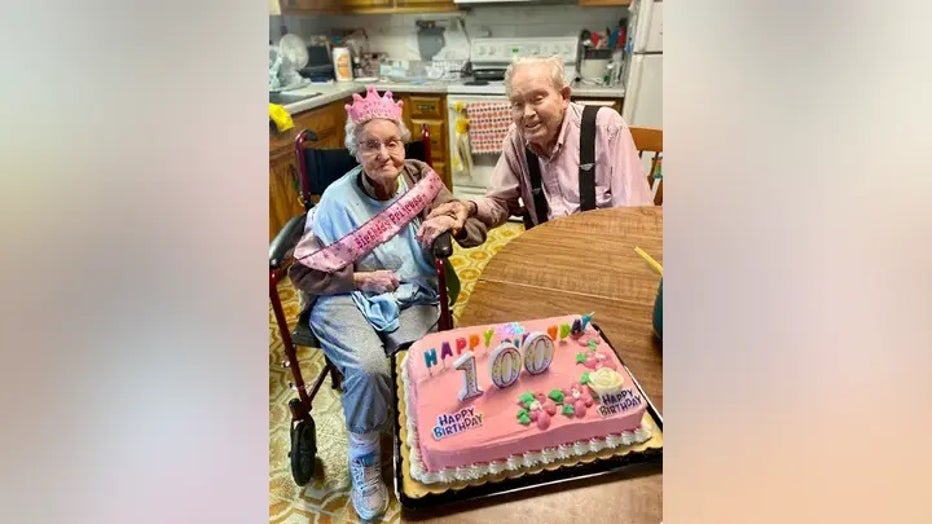 June and Hubert Malicote celebrated their 100th birthdays at home with a pink sheet cake. (Photo courtesy the Malicote family)

She continued, "Now there's all the health magazines telling you to grow your own food. That’s how they grew up. Back in their day, if you didn't make your own food, you were going to starve to death."

"So, they learned how to do that as children. And that's how they raised us."

Jo Malicote added that she thinks the key to her parents’ longevity is that they’ve always kept busy.

"They've never sat down and gotten lazy," Jo concluded. "We own the five acres and there's always fences to mend and there is always work to do."