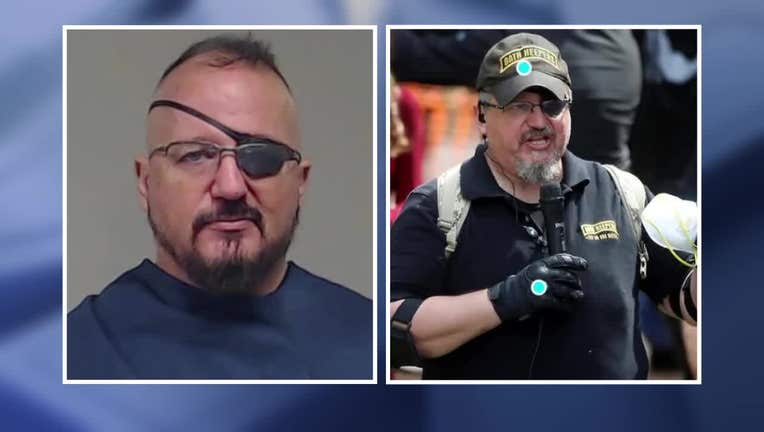 WASHINGTON - Oath Keepers leader Stewart Rhodes told jurors there was no plan for his band of extremists to attack the U.S. Capitol on Jan. 6, 2021, as he tried Monday to clear his name in his seditious conspiracy trial.

Taking the stand in his defense for a second day, Rhodes testified that he had no idea that his followers were going to join the pro-Donald Trump mob to storm the Capitol and that he was upset after he found out that some did. "There was no plan to enter the building for any purpose," Rhodes said.

Rhodes said he believed it was stupid for any Oath Keepers to go into the Capitol. He insisted that was not their "mission."

In text messages on the day of the attack, though, Rhodes struck a different note, referring to Trump supporters who entered the Capitol as "actual patriots." Rather than telling his followers to stay away from the riot, he called them to the area. Rhodes maintained that was simply a meetup point to leave, but prosecutor Kathryn Rakoczy pointed out Rhodes never condemned the insurrection. Hours after it ended, he wrote a message saying "you ain’t seen nothing yet."

She also showed multiple messages where Rhodes referred to "us and our rifles" or "boots on the ground" ahead of Jan. 6. Rhodes had been "saying for weeks, if not months, that when the president didn't act your supporters would take things into their own hands," she said.

Rhodes said Monday that he was talking about what he thought could happen after Jan. 6.

Rhodes is on trial with four others for what prosecutors have alleged was a plan to stage an armed rebellion to stop the transfer of presidential power from Republican Trump to Democrat Joe Biden. Prosecutors have tried to show that for the Oath Keepers, then riot was not a spur-of-the-moment protest but part of a serious, weekslong plot.

Rhodes’ defense is focused largely on his the idea that his rhetoric was aimed at persuading Trump to invoke the Insurrection Act, which gives the president wide discretion to decide when military force is necessary and what qualifies as military force. Rhodes told jurors he believed it would have been legal for Trump to invoke that act and call up a militia in response to what he believed was an "unconstitutional" and "invalid" election.

"All of my effort was on what Trump could do," Rhodes said.

It was not entirely clear what Rhodes would have wanted the militia to do after being called up by Trump. But he insisted that disrupting the certification of the vote was not one of his goals and he expected that it would be certified.

Prosecutors say Rhodes' own words show that he was using the Insurrection Act as legal cover and that he was going to act no matter what Trump did. Messages Rhodes sent include another from December 2020 in which he said Trump "needs to know that if he fails to act, then we will."

Prosecutors will start to present their case Monday against members of a far-right militia facing charges in connection to the Jan. 6 attack on the U.S. Capitol. The founder of the group is from Granbury.

Another Oath Keeper previously testified as part of an agreement with prosecutors that he and others in the group were prepared to use "any means necessary" to stop the certification of the vote.

Rhodes also addressed another key part of prosecutors' case: a massive arsenal of weapons the Oath Keepers had a hotel at nearby Virginia. Prosecutors say the guns were an element of a so-called quick reaction force that the group could deploy quickly to Washington.

Rhodes claimed the weapons weren't for a quick reaction force, though the prosecution again showed several messages where he referred to the weapons by that name and one where he said the "situation calls for it."

Rhodes did not go into the Capitol on Jan. 6 and prosecutors have described him as "a general surveying his troops on a battlefield." Rhodes said that he merely went to the Capitol to find his Oath Keeper followers who were not on a security "mission" protecting figures such as Roger Stone, a longtime Trump confidant. Rhodes said he didn't even realize that one of his men who went into the Capitol had done so until he saw him in an FBI photo.

Prosecutors have spent weeks methodically laying out evidence that shows Rhodes and the Oath Keepers discussing the prospect of violence before Jan. 6 and the need to keep Biden out of the White House at all costs.

Among their key witnesses were two of Rhodes’ former followers who pleaded guilty in the Capitol attack and agreed to cooperate with investigators in the hopes of getting a lighter sentence. One told jurors that the Oath Keepers were prepared to stop the certification of Biden’s electoral victory by "any means necessary," including by taking up arms.

Three Oath Keepers who pleaded guilty to seditious conspiracy and struck cooperation deals with prosecutors were notably not put on the stand by the government. It’s unclear why.

The defendants are the first among hundreds of people arrested in the Capitol riot to stand trial on the Civil War-era charge that calls for up to 20 years behind bars. The Justice Department last secured such a conviction at trial nearly 30 years ago and intends to try two more groups on the charge later this year.

On trial with Rhodes, of Granbury, Texas, are Kelly Meggs, leader of the Florida chapter of the Oath Keepers; Kenneth Harrelson, another Florida Oath Keeper; Thomas Caldwell, a retired U.S. Navy intelligence officer from Virginia; and Jessica Watkins, who led an Ohio militia group. They face several other charges in addition to seditious conspiracy.