Surveillance video at a Southeast Oak Cliff gas station shows people recklessly setting off what looks like fireworks in the parking lot.

DALLAS - Surveillance video at a Southeast Oak Cliff gas station shows people recklessly setting off what looks like fireworks or other explosives in the parking lot.

It was the night of July 4th and large crowds of people were there either watching or participating.

This came to our attention from people who live in the area who are angry that, from their perspective, police did not do much to break it up.

Dallas police confirmed multiple first responders were shot at with fireworks, but DPD did not say if officers ordered the crowds to disperse during the hours-long incident.

Shell casings, trash, and burned grass was left behind from Monday’s incident.

It lasted multiple hours and police were in the area, but it’s unclear if DPD actually got out and ordered the crowd to disperse. 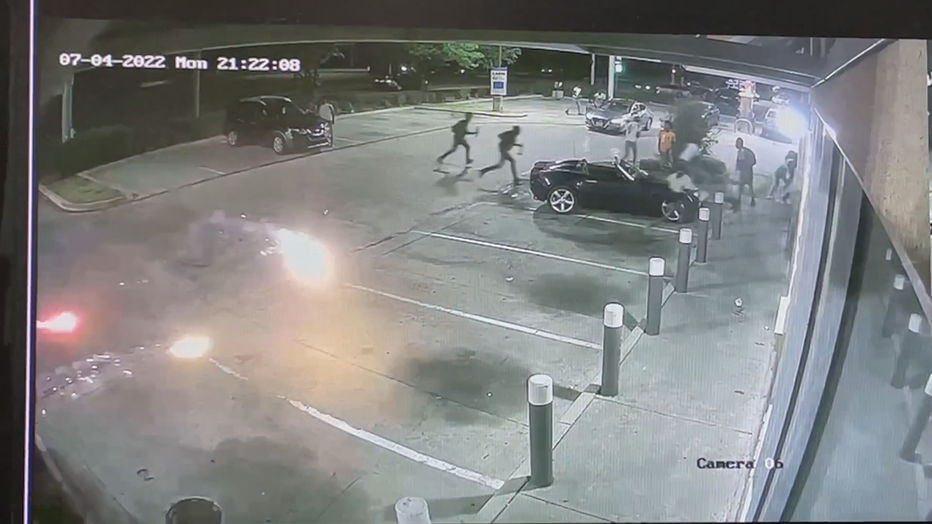 Surveillance video from the Hi-Mart Gas Station in Highland Hills showed the hours-long barrage of fireworks being shot at passing cars and people in the parking lot late Monday night into early Tuesday.

"I knew it was unsafe for people to be throwing firecrackers around the gas station. But, you know, when you young and don’t know better, the lord have to take care of you," City of Hope & Restoration Life Center Church Pastor Patricia Thompson said.

The fireworks disrupted traffic and set off multiple fires, but the criminal mischief didn’t stop there.

Surveillance video shows a guy get out of a car and fire shots into the air.

Tuesday morning, Pastor Thompson found out her church across the street was also impacted.

"I said my grass looks terrible, I am just glad my church didn’t catch on fire," she said.

Some videos circulating online do show police entering the parking lot of the gas station, but witnesses said police didn’t stop there to break up the crowd.

Thompson said she talked to police on the phone Tuesday.

"They said, yes, they were patrolling the area, but it was about 400 young people saying they were having a field day. They were outnumbered," she said.

As for the dangerous and illegal actions of the participants Monday night, some people said they’re not surprised.

"They are wrong for shooting at cars, but no one blew up, no one died. They could have kept it to their self," Johnson said.

Thompson said this community needs more activities for young people and added that she is going to consider having an event next year.

Dallas police said they arrested one person accused of throwing a firework at officers in a marked police vehicle.