According to the Fort Worth Fire Department, there were 203 grass fires on Monday. In the city of Dallas, the numbers were high too.

The Fort Worth fire chief says the grass fires began spreading quickly, damaging the mortars and cakes used to shoot off the fireworks.

It was a joint decision between the fire marshal and pyrotechnics company to cancel the rest of the show.

Grass fires were a problem for firefighters across North Texas Monday.

Video from SKY 4 Tuesday captured the aftermath of hundreds of grass fires that sparked over the Fourth of July holiday.

Several small grass fires that broke out along the Trinity River in Fort Worth Monday night forced the abrupt cancellation of the famed fireworks show at Panther Island Pavilion just minutes into the celebration. 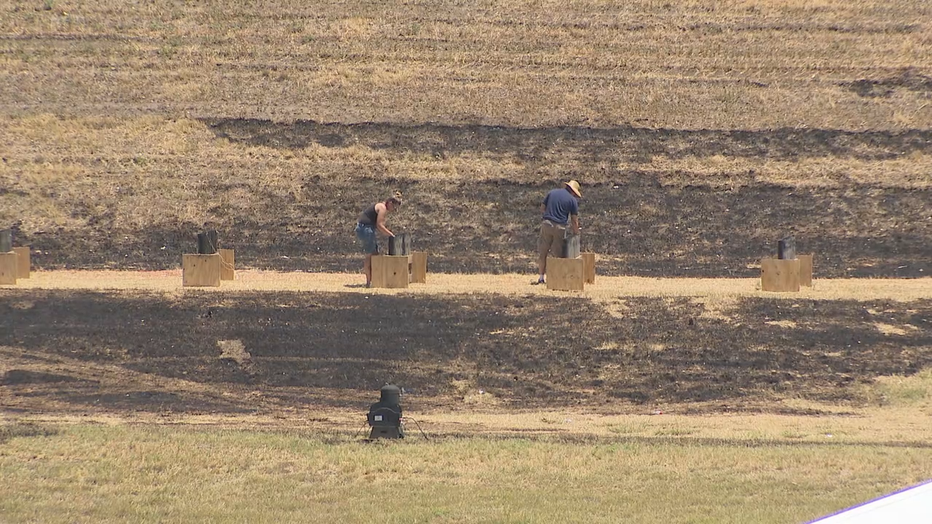 "Last night during the course of the first six or seven minutes" said Fort Worth Fire Chief Jim Davis. "It became obvious that that grass fires that were occurring were developing at a much faster pace than the organization responsible for the shoot could put it out."

That organization is a San Antonio-based company called "Magic in the Sky." On Monday, pyrotechnics crews were seen dismantling the rest of the unused fireworks.

On Tuesday, FOX 4 had the chance to speak with Jacob Dell, the owner of Magic in the Sky.

"Our technicians felt that it was not safe to continue, and that’s why the decision was made to cancel the show," he said.

Firework company explained what went wrong during Fort Worth show

The crew that put on the Fort Worth fireworks show explains why the show had to stop after the fireworks caused a grass fire. They say the fires are a "rare occurrence." But there are still plenty of questions.

Dell says it was a joint decision along with the Fort Worth fire marshal.

"The last thing we want from a public safety standpoint is to reauthorize the shoot and have something happen where fireworks end up in the crowd across the river," Davis said.

"We typically shoot 400-500 programs a year, and I would say a situation like this occurs every 8 to 10 years, so it’s a very rare occurrence," Davis said.

The canceled show was just a part of the Fort Worth Fire Department’s busy holiday. They received more than 1150 total calls on Monday. Their average around 400.

The department responded to more than 250 grass fires specifically caused by illegal fireworks.

Davis says it’s also hard to catch everyone in the act or in possession of illegal fireworks.

Monday, they issued about 33 citations with help of footage from various cameras around the city.

"It definitely showed that it could work, and it is something for us to go back and debrief that we could go back and try to put in place," Davis said.

As of right now, Davis says Magic in the Sky is not facing any kind of negligence, issues or citations.

The Fort Worth Fire Department's bomb and arson unit will be eliminating the remaining fireworks in a "controlled environment."

"There were approximately 1,000 shells at that point that had been unshot," Davis said.

In the city of Dallas, the number of grass fires were high too.

Evans says the number nearly doubled after 10 p.m. He attributed that in large part to illegal fireworks being shot off at night.

"With the hot dry conditions combined with fireworks used, we think that contributed a lot to what we responded to not only last night but the entire weekend," he said.

Some fires sparked underneath city bridges, like the Commerce Street Viaduct. Luckily, no one was hurt, and no structures were burned.

Evans reminds folks with leftover fireworks that it is illegal to shoot them off within the city limits and is urging folks not to do so again Tuesday night.