Police arrested a theft suspect after a chase through three counties early Thursday.

Police arrested a theft suspect after a chase through three counties early Thursday.

A Royse City officer in Rockwall County tried to pull over a suspicious pickup, but the driver took off. When it finally ended, police say Jerry Don Frazier, Jr. was arrested for evading arrest, drugs and theft.

The all-out chase started around 1:30 a.m. on westbound Interstate 30.

Police say it began when a Royse City police officer observed a silver Chevy pickup with construction materials leaving a new home build. The officer attempted to pull the truck over, but he drove away.

The chase quickly moved to the interstate, where officers took out the left front tire with a spike strip in Rockwall.

Still, the truck continued careening on through Garland and Mesquite toward Dallas. It exited several times, only to get right back on.

It went into downtown, then on to I-45 south. Dallas Sheriff’s deputies deployed spike strips again, this time taking out the right front tire too.

But the truck kept on going on both rims, crossing into Ellis County. The driver finally exited 5th Street in Ferris and eventually slid onto a curb, the vehicle disabled.

The man was taken into custody and his female passenger, relationship unclear, was also handcuffed and questioned.

Incredibly, no one was hurt or injured in the chase.

Frazier, Jr. is facing multiple charges including theft, evading arrest and drug possession. The female passenger will not face any charges. 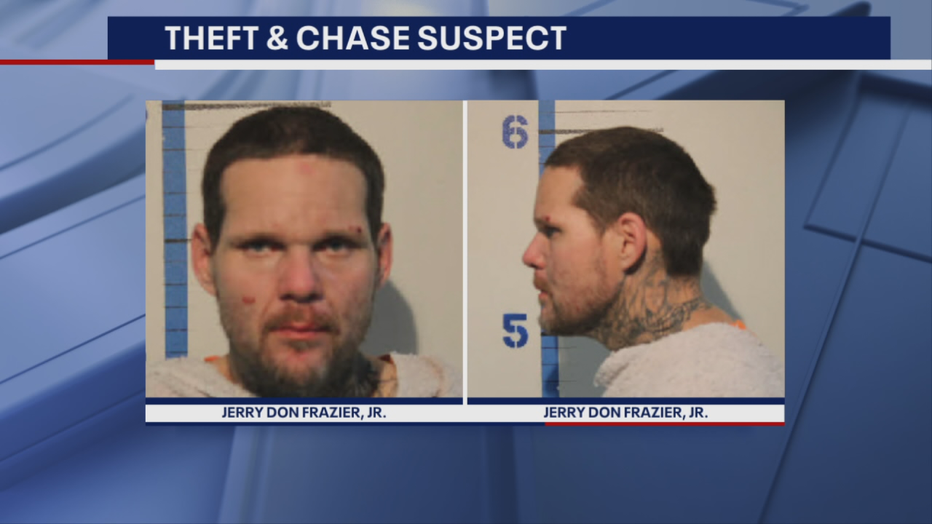