The forecast calls for a nice week in North Texas. It will give people time to clean up all the trees and limbs that fell during last week's winter storm.

PLANO, Texas - The ice has mostly melted across North Texas, but the cleanup from last week’s winter storm is not done.

City crews in Plano have been busy cleaning up all the trees and limbs that fell because of the ice.

RELATED: North Texas snow totals: Here's how much snow fell across the Metroplex

The city said nearly 150 public works staff members worked non-stop in the freezing temperatures from Wednesday through Friday evening. They worked with parks and recreation staff to remove more than 250 fallen trees and branches.

The team also sanded roads to make travel safer for first responders and neighbors and they kept water operations up and running for residents as well.

"Those crews were out for 36 hours straight sanding the intersections and bridges, overpasses," said Steve Stoler with the city of Plano. "And these guys are just relentless. They’ve been out continuously too. That’s a lot of calls. 250 calls."

The ice has mostly melted across North Texas, but the cleanup from last week’s winter storm is not done.

Plano resident George Bryson said there is still damage around his block and is appreciative the city is on top of it.

"We walk around the neighborhood every day and a lot of trees have branches down, just branches down not whole trees," he said. "Our neighbor’s having a tree cut down right now. As we left, they started at 7:30 this morning."

In McKinney, crews have also been working continuously to keep roadways, alleys and sidewalks clear from storm debris. 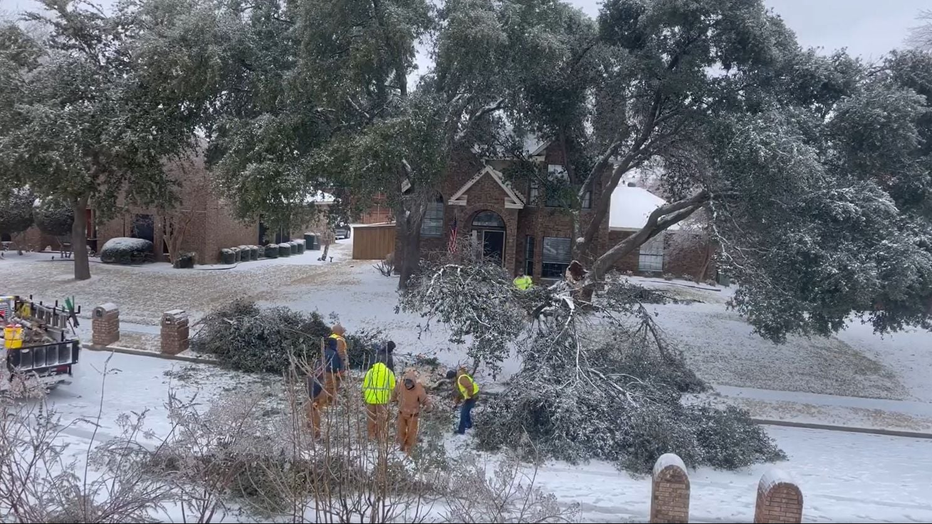 "We’ve got a lot of trees that were down from branches to whole trees that froze over with the ice and precipitation freezing," said McKinney Compliance Officer Jeremy Knoch.

Though last year’s winter storm was more severe in terms of damage, city crews in McKinney say this year they are busier clearing roadways of debris like tree limbs.

"Thursday through Friday, we had about 30 calls we went to for trees or limbs down," Knoch said. "This was a big strain on everybody, so we had to work together as public works in general."

But despite the damage caused by some fallen limbs, city crews say thankfully no reported injuries.

"They’re unsung heroes. They really are," Stoler said. "These guys go out in the elements, and they’re trying to make it safe, so other people don’t have to worry about these problems."

City crews say though we have warmer temperatures melting the ice, it will likely take weeks to finish cleaning up from the storm.

The city of Plano says if you can safely move limbs out of the way, you can put those out with your regular yard waste pickup.

RELATED: Power restored for most North Texans following winter storm, but some still without power