Those at Destiny Pointe Christian Center said they typically serve thousands of people at each of their food drive events throughout the pandemic, and the need hasn’t slowed down.

Even weeks out from the winter storm, families in Arlington are still struggling, as they are in need of food and water as they work toward recovering.

"We hope we give a little glimmer of hope somewhere," Pastor Renee Fowler Hornbuckle said.

Since the start of the pandemic, Destiny Pointe Christian Center has been hosting more than a dozen food drives to get people through tough times.

"Believe it or not, here we are several weeks out from the arctic storm, and people still do not have adequate drinking water or cooking water," Hornbuckle said.

Now, they are stepping up their service to help people get through another crisis, as last month’s winter storm left thousands without basic necessities, like food, power, or water. Struggles some families are still dealing with.

"We actually had to ship water from other states. Other people brought the water in so that Texans could have enough water," said Rachelle Fletcher, with The Goodness Project. "They still need that water because they’re cleaning up, their floods happened, and they just don’t even have running water right now."

The church said they typically serve around 400 cars at each event.

Families are still cleaning up and recovering from the storm.

"With the bad weather we had, I had no groceries at all," Cathy Burris said. "Our pipes didn’t bust, but they were frozen for four days, so we didn’t have water. So the bottled water and stuff I did have, we’ve gone through." 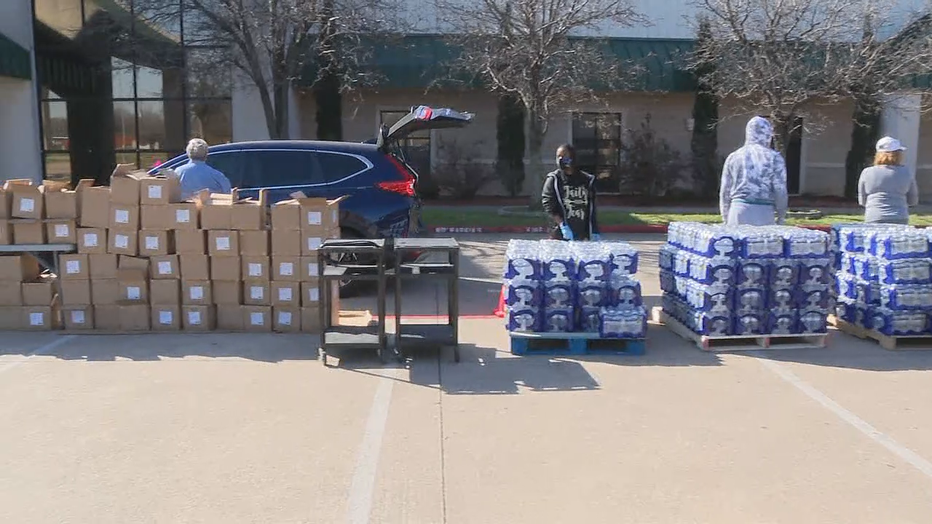 "Not only are we dealing with the pandemic, we had to deal with the storm that came through. That made it even more difficult, especially for people who have like disabilities and who are on fixed incomes," Donna Williams said.

Church leaders said that even though the weather has warmed up, families are still dealing with the after-effects of the winter storm.

"So they can just have their basic necessities met. Here we are in America, and the thing is we’re dealing with not having access," Hornbuckle said.

And they’ll continue to serve others for as long as they’re needed.

"Make certain that you’re at least reaching and extending to your neighbor. You never know who is in need," Hornbuckle added.