63-year-old Diana Jones&nbsp;was a firefighter and EMT with the Cresson Volunteer Fire Department, located about 25 miles southwest of Fort Worth.

CRESSON, Texas - A firefighter from North Texas died Monday while fighting a wildfire in the western United States.

63-year-old Diana Jones was a firefighter and EMT with the Cresson Volunteer Fire Department, located about 25 miles southwest of Fort Worth.

Jones’ son, Ian Shelly, was a fire captain with the same department. They both headed west in late July to fight fires in Oregon before heading to California doing contract work to relieve drained west coast counterparts.

Jones’ latest assignment sent her to the Mendocino National Forest north of San Francisco. She shared photos of the area on her Facebook page on Sunday.

The fires Jones was battling consumed nearly 240,000 acres. Only 20% are contained.

The United States Forest Service confirmed one firefighter died Monday in the Mendocino National Forest and another firefighter was injured.

Early information indicates Jones may have been killed while their truck was being repositioned.

Jones — a mother, grandmother and former hairdresser — came from a family of public servants. She had been with the fire department for nearly five years.

Becker says despite their own tremendous loss, they’ll be supporting Jones’ family, especially Shelly who also lost his father in June. 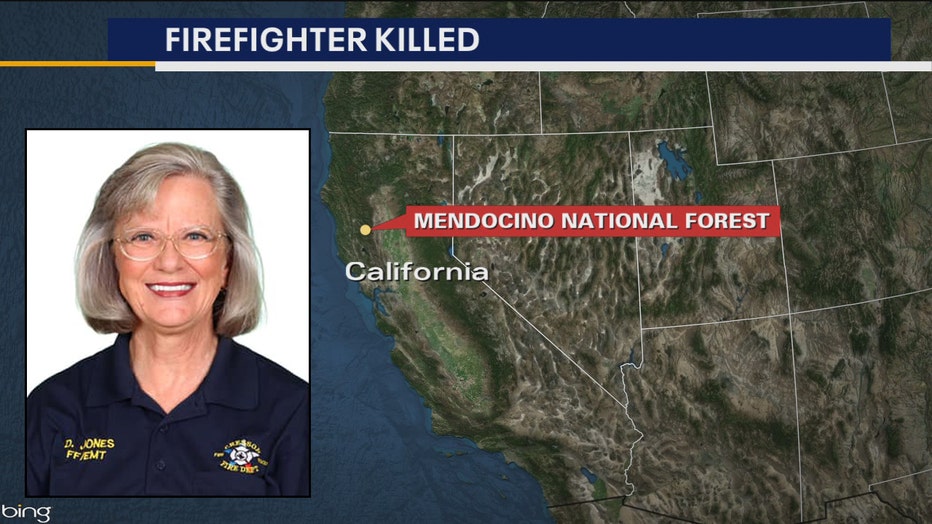