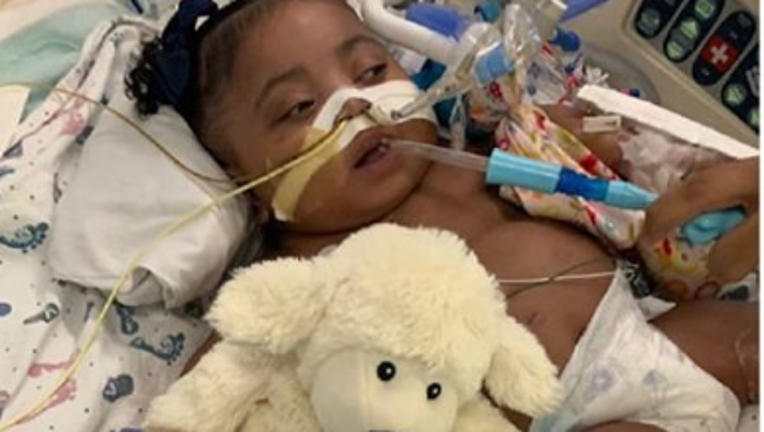 DALLAS (AP) - A Texas appeals court ruled Friday that a hospital must keep a 17-month-old girl on life support pending a trial addressing the merits of the law doctors invoked to withdraw life-sustaining treatment.

The case has been making its way through the courts since Nov. 10, when Cook Children’s Medical Center had planned to remove Tinslee Lewis from life support after invoking Texas’ so-called “10-day rule.” The law can be employed when a family disagrees with doctors on withdrawing life-sustaining treatment.

Doctors at the Fort Worth hospital have said Tinslee is in pain and won’t ever improve. But her mother, Trinity Lewis, has said she doesn’t think her daughter is suffering and that any end-of-life decision should be hers to make.

The law stipulates that if a hospital’s ethics committee agrees with doctors, treatment can be withdrawn after 10 days, as long as a new provider can’t be found to take the patient. Efforts to find another facility to take Tinslee have so far been unsuccessful.

A lower court denied the mother’s request for an injunction in a Jan. 2 ruling. The following day, Texas’ Second Court of Appeals granted her request to keep the child on life support until it could rule on the case. On Friday, the appeals court reversed the lower court’s order denying the injunction and sent the case back to trial court.

Texas Right to Life, an anti-abortion group that has been advocating for Tinslee, said it a statement that they “pray” the court strikes down the rule in the trial.

Trinity Lewis said in the group’s statement that she was thankful the appeals court “sees the injustice” of the 10-day rule and “will allow me to fight for my daughter.”

The case became a rallying point for Republicans in Texas. On Friday, state Attorney General Ken Paxton applauded the appeals court’s decision in a statement, saying, “life is the first constitutionally protected interest, and this innocent baby girl must be afforded the rights she deserves.”

The hospital did not immediately comment on the ruling.

Tinslee has been at Cook Children’s since her premature birth on Feb. 1, 2019. The hospital has said she has a rare heart defect and suffers from chronic lung disease and severe chronic high blood pressure. The hospital has said she has been on a ventilator since going into respiratory arrest last July and requires full respiratory and cardiac support.

At a December hearing, Dr. Jay Duncan, one of Tinslee’s physicians, testified that the girl is in pain and that treatment was no longer benefiting her. In a Jan. 2 statement, the hospital said Tinslee must remain on a constant stream of painkillers, sedatives and paralytics to keep her alive.