Many North Texans used Wednesday to get their homes and cars ready for the upcoming arctic blast.

DALLAS - Many North Texans used Wednesday to get their homes and cars ready for the arctic blast.

Faucet covers and plant protectors are flying off the shelves, as time to get ready is starting to run out.

Unlike the February 2021 winter storm, this freeze is happening as many people are hitting the roads before Christmas.

People have some different things to think about to get ready.

Jason Marshall was among the many snagging faucet insulators before they were gone Wednesday morning.

"Getting ready for the freeze," he said. "Has been hard to find [faucet insulators]. Only here at this Ace." 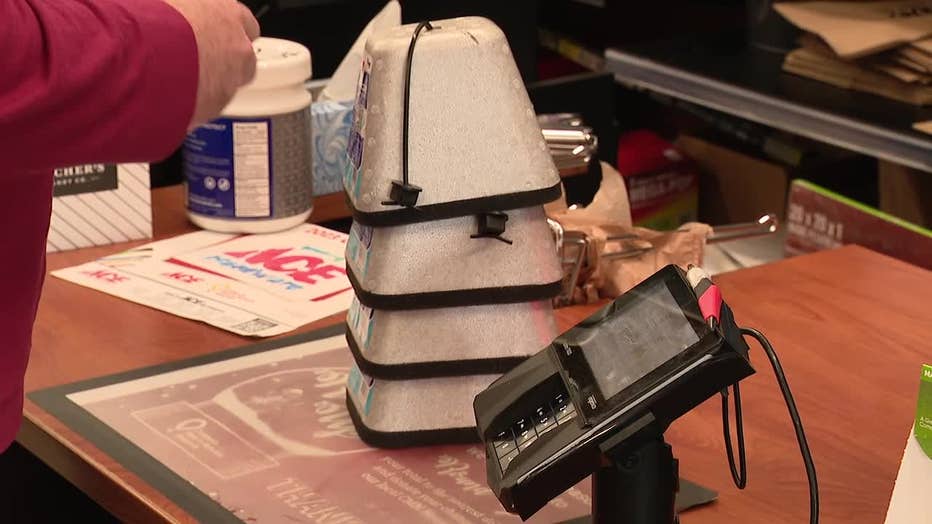 "Sometimes wrap a towel around it, but thought I’d go with the official thing," Mike Sauer said.

Many said the February 2021 winter storm has served as an important wakeup call when it comes to freezing forecasts.

"Plant protection, there's a product called a planket. We're out of those, but right now we're using lawn and leaf bags," he explained. "Can wrap in a blanket or a sheet. You don't want to use plastic. You do not want plastic in contact with the leaves on the plant. When it freezes, it will kill it."

Rakin said burlap on plants is another option.

During the 2021 winter storm, some learned the hard way that hot water heater lines froze in attics or garages.

"This is pipe insulation," he said. "They do break down over time."

RELATED: Texas leaders on arctic blast: 'The power grid is ready and reliable'

A lot of last-minute shoppers who usually wait until Christmas Eve decided not to take some chances with the cold weather coming in.

Generators are also a hot item.

"If you are thinking about getting one, don’t wait for it to happen. They will sell out in 30 minutes," Rakin added.

"I have a full house generator, just putting the finishing touches on," Jeff Singley said. "Have the peace of mind is nice."

"Trying to make sure we leave with the house in good condition. Burst pipes would not be good," said Dwight Mankin, who lives in Coppell.

Many are also checking their cars.

Battery checks are especially important ahead of an extended freeze, but Dave Axberg found that he couldn't be prepared for everything

"Had antifreeze, battery check, but road hazards were not included in my things to do," he said.

AAA said damage caused by burst pipes is covered by most home insurance policies, as long as owners maintain heat in the building.

For those who are hitting the road, in addition to a battery check, AAA recommends keeping blankets, food, and water in the car, along with a flashlight.