North Texans prepare to bundle up ahead of possible snow

It will likely be a busy weekend at grocery stores as people stock up on basics ahead of the storm. We've also seen people making a run on firewood and covers for their outdoor pipes.

MESQUITE, Texas - There could be a lot of broken pipes when North Texas finally thaws out next week, and people are stocking up on pipe wrap and plant coverings.

But it's not just how cold it will be, but how long those freezing temperatures will last.

The possibility a long stretch of some of the coldest temperatures in decades has people trying to defend against the coming deep freeze.

[REPORTER: "Are you ready for the cold?"]

"We’ve been ready trying to keep warm. I bought me a jacket, getting some heaters right now for the house," one North Texan said.

"It’s been steady [Thursday]. [Wednesday] evening was chaotic," said Ron McCarty, with Elliot’s Hardware in Mesquite. "We had a truck in with some heaters [Wednesday]. They were gone the minute we put them down, like Black Friday."

People are worried about what being below freezing until possibly next week might do.

"When you go through multiple days of freezing, that’s when you really run into the potential of pipes busting," McCarrty explained.

People are picking up not just faucet covers, but foam pipe covers as well.

"We actually had a water heater that was busted. It had been leaking, the customer didn't notice it, and when those freezing temperatures come, they hit that hot water. It’s definitely going to split the pipe more, and then you'll really know it," Wallace explained.

There could be a lot of broken pipes when North Texas finally thaws out next week, and people are stocking up on pipe wrap and plant coverings.

"And also have your heat turned up to at least 70-75 degrees minimum, and open up the cabinet doors in your bottom cabinets so that the air can flow in and get to those pipes as well," he explained.

While people are protecting their pipes, they should also take care to cover their plants.

"The key is to make sure its breathable. You don’t want to use any plastic that can actually increase your chance of freezing that plant. Old sheets, even old blankets will work," said Patrick Dickinson, with Rooted In.

Sheltering the plants and safeguarding the pipes will hopefully get everyone through the deep freeze. 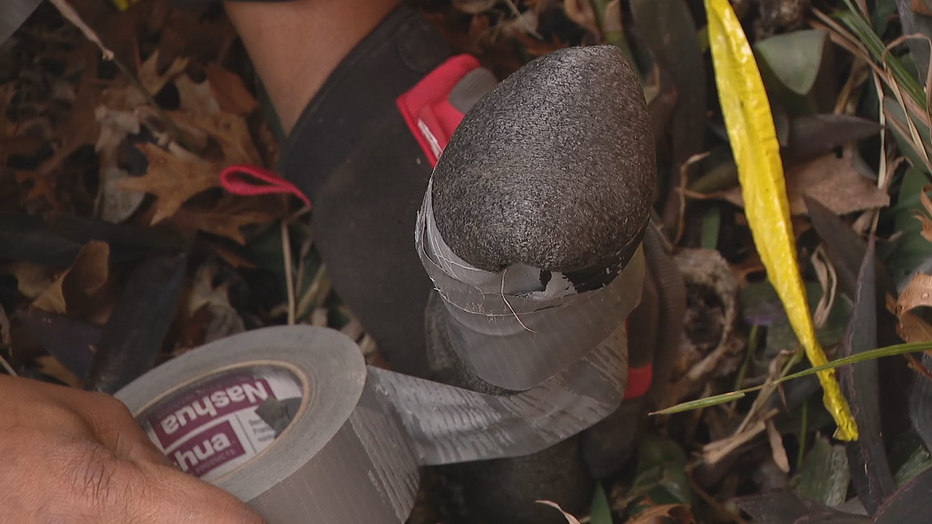 It will likely be a busy weekend at grocery stores and department stores as people stock up on basics ahead of the anticipated winter weather.

There’s also been people making a run on firewood.

"I had some left and figured I should supplement a little bit more," said Charlie Vincent, who bought some firewood Thursday.

With a winter storm coming and many places running out of wood, Burn This Firewood in Garland, was just trying to chop fast enough to keep up with demand.

"So we have little chunks that you can pick and stack, but if you’re waiting for a long firewood piece, we’re cutting that as we go," said Amy Langbein Heath, owner of Burn This Firewood.

The wood is salvaged. Some of it is from trees downed by the 2019 tornado in Dallas.

Now repurposed for another storm.

Hopefully for comfort, and not out of necessity.

"Yeah, just in case something crazy happens," Vincent said. "I don’t anticipate that, but you never know. It’s best to be prepared I guess."

Grocery stores have also been busy.

"My daughter called me and said, ‘Mom, do you have enough food?’ And I said, ‘Not exactly, but I’m going to the store tomorrow,’" Joanne Armstrong said.

Many are stocking up on essential food items, so they don’t have to go out in snowy and icy weather.