It's beautiful and refreshing by day and even better at night. Klyde Warren Park's impressive new super-sized trio of fountains officially spouts off today.

The fountain located on the east side of the park between Pearl and Olive streets is expected to be a big draw for families.

It spans over 5,000 square feet and includes a splash pad area that’s big enough for a hundred kids to play on.

"The children really, really enjoy it and meet each other from every neighborhood," said Kit Sawers, the president of Klyde Warren Park.

Just after sunset each night, the water in the fountain will move to a choreographed light and music show. The music will change monthly. 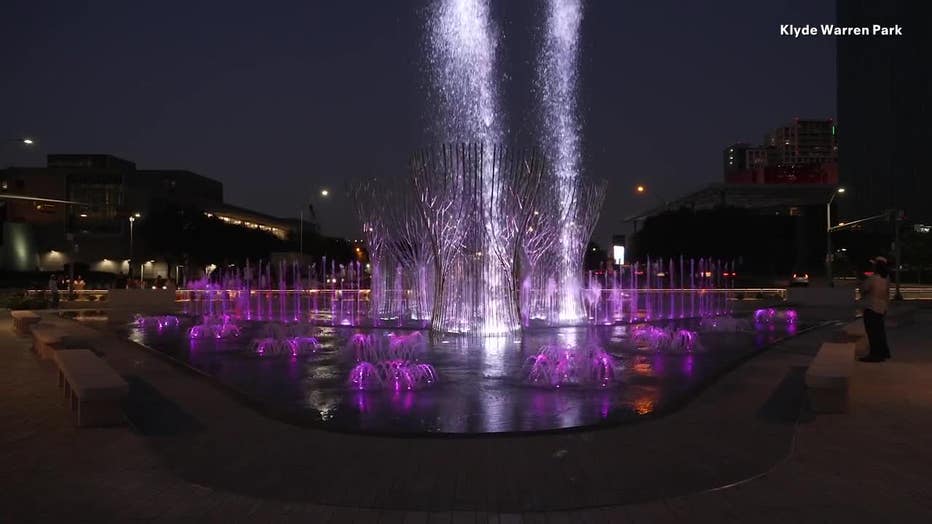 "We’ve just created a beautiful moment for families to enjoy together," Sawers said. "This is a community gathering place and we’re thrilled to have everybody coming to share these common traditions and memories with their families."

The fountains are named after longtime Klyde Warren Park board member Nancy Best, who donated $10 million for the construction.

"It’s been years in the planning. When the deck for Klyde Warren Park was built, it actually was built to accommodate a fountain. Ten years later, we’ve got the design we wanted and thanks to a generous gift from Nancy and Randy Best we’ve designed this beautiful fountain that has three trees in the middle of it surrounded by little bubblers that are similar to rose buds and leaves. We just have this incredible majestic site for the city to enjoy," Sawers said.

The water itself is recycled and goes through four filtration processes. It will be checked regularly for safety.