The Caldwell County Sheriff's Office released new details in their search for 21-year-old Jason Landry, who has been missing since Dec. 13.

LULING, Texas - The search continues for Texas State University student Jason Landry, who went missing in December after a crash near Luling.

The Caldwell County Sheriff's Office released new details in their search for 21-year-old Landry, who has been missing since Dec. 13 when he left his apartment in San Marcos just before 11 p.m. for Missouri City to spend the holiday break with his family. 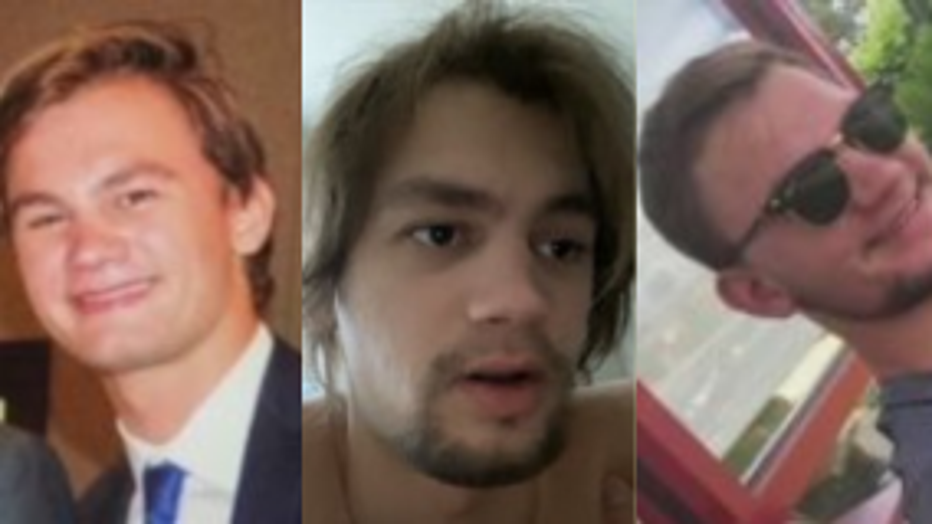 CCSO took over the search for Landry on Dec. 18, following initial investigative and search efforts by the Texas Department of Public Safety.

A timeline from the sheriff's office tracks Landry's movements from when he left his apartment to when his phone ceased pinging in Luling. CCSO says that investigators have gained access to most of Landry's phone and computer data and is waiting for search warrants to be returned from social media and tech companies.

The Caldwell County Sheriff's Office released new details in their search for 21-year-old Jason Landry, including a timeline of Landry's movements the day he disappeared.

The timeline provided by CCSO goes as follows:

CCSO says that as Landry went through the intersection at Hackberry Street where Hwy 80 becomes Austin Street, he stopped using the Waze app and began using Snapchat.

Jason Landry left Texas State University Sunday night for Houston to spend the holiday break with his family. When he reached Luling, Investigators believe Jason made a wrong turn that put him onto Salt Flat Road.

CCSO says investigators are now focused on the 67-minute window between Landry's last data footprint at Austin Street and Magnolia Avenue and the discovery of the crash scene on Salt Flat Road. Investigators are trying to determine why while Landry's phone had cell signal and was powered on, it doesn't appear to have been used since that intersection.

CCSO says his car was found abandoned with the lights on and the keys in the ignition. The front passenger side door was locked as well. The crash has been determined to be a single-vehicle crash, most likely from overcorrecting on the gravel road and spinning off the road. The rear driver’s side corner hit a tree on the east side of the roadway, propelling the front driver’s side into another tree and barbed wire fence.

There is no evidence that any other vehicle or outside force was involved in the collision, according to CCSO, and investigators are confident that the contact with the trees and fence line was the only contact the vehicle sustained based on the evidence collected. The car's rear window was broken as a result of the impact with a tree.

CCSO says that neither the volunteer firefighter who found the vehicle or the trooper who responded to the scene entered the car. The car was then towed to an impound where Landry’s father, the registered owner of the vehicle, entered through the unlocked driver’s side door and found his son's cell phone between the driver’s seat and the center console.

CCSO says that it is unknown if the phone fell as Landry was driving through the intersection of Austin St and Magnolia Ave. or during the crash. Landry’s father collected the phone and attempted to find the crash scene.

Approximately 900 feet from the crash scene, Landry’s father found and collected articles of his son's clothing (shirt, shorts, socks, underwear, slide sandals, and a wristwatch) in the road. Investigators then processed those clothes and found a single small blood smear, which CCSO says was not indicative of serious bodily injury and was possibly caused by Landry touching the barbed wire fence or foliage. No evidence of blood was found inside the car.

A review of the body and dash cameras from the trooper's initial response to the crash scene showed that approximately 900 feet from the crash scene, a backpack, a ball cap, a plastic bag of personal toiletries, and a tumbler with a deceased beta fish in it, all belonging to Landry, were found in the road, north of the clothing recovered by his father.

The backpack contained his wallet, a usable amount of marijuana, a laptop computer, gaming equipment, and a few personal effects. CCSO says that any previous report stating that the backpack was "filled" with narcotics is inaccurate. The small amount of marijuana is being held with findings pending on whether it was combined with an unknown hallucinogenic substance.

21-year-old Jason Landry left Texas State University Sunday night and was heading to Houston to be home for the holiday.

CCSO says investigators believe the clothing found in the roadway was what he was wearing before the crash, but there is no indication that the clothing was removed under duress or threat. There was cold weather during the time Jason is believed to have gone missing, with the low temperature being recorded around 36 with a high of 43.

Landry's phone was released to DPS, who began efforts to access the device and its data. CCSO says that there is currently no evidence he was traveling to meet with or had communicated intent to meet with anyone in or around Luling. 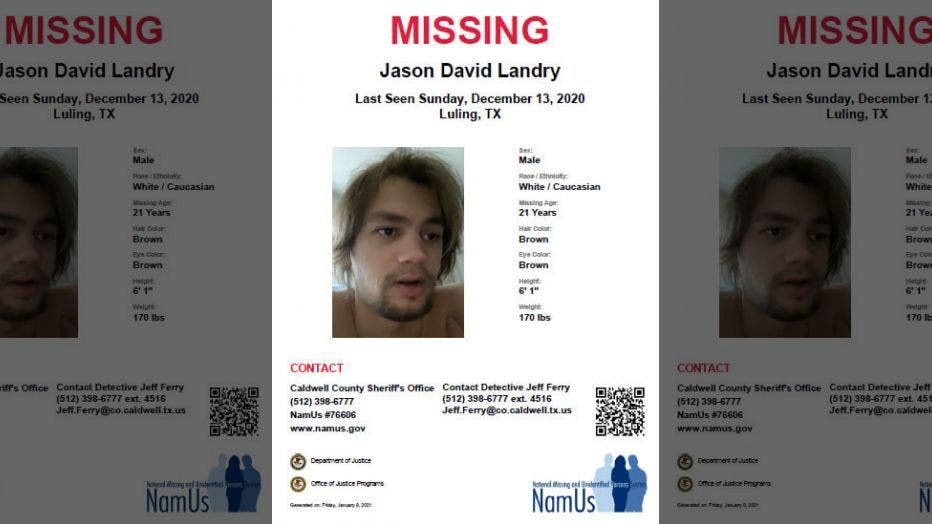 Jason Landry has been missing since Dec. 13 when he left San Marcos to spend Christmas break in Houston with family. A gravel road northeast of Luling is where his wrecked car was found the following Monday. (Caldwell County Sheriff's Office)

CCSO says that this is believed to be an isolated incident with no threat to the community and that there is currently no evidence that an unknown person of interest is involved. In addition to search organizations, private investigators, retired federal agents, and other law enforcement agencies, CCSO says it has been working with Landry's family and an ex-girlfriend who lives out of state.

CCSO says additional searches for Landry are being planned and organized. Investigators have also reviewed hundreds of hours of video from cameras in and around Luling which have not provided any evidence. The public is asked to review footage from any cameras on their property in the area as soon as possible. 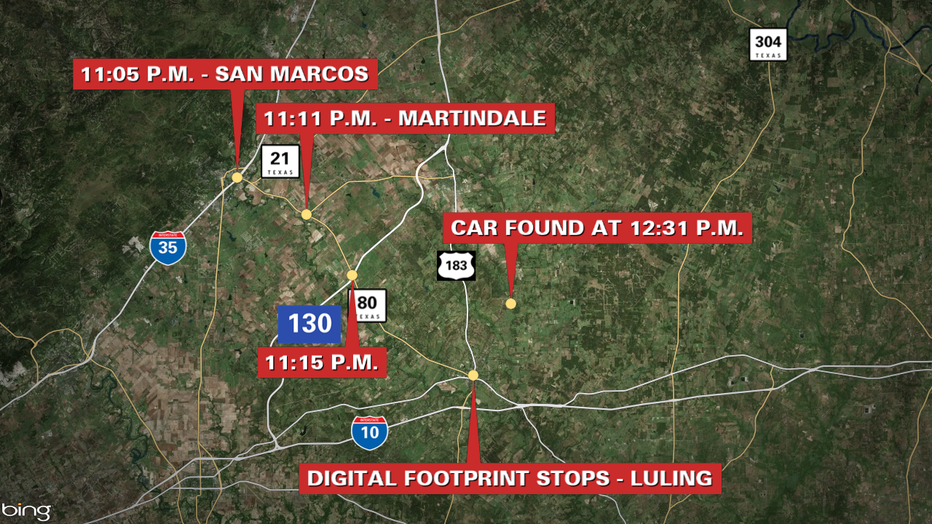 A map of the timeline from the sheriff's office tracks Landry's movements from when he left his apartment to when his phone ceased pinging in Luling.

Landry is 6’1", approximately 170 pounds with brown eyes. He has an olive complexion, and a scar on his ankle. He has medium length brown hair and may have a goatee.

Texas Search and Rescue TEXSAR conducted an extensive search in which 3,900+ acres were searched by foot, horse, and canines with another 16,900+ acres by air, using drones, fixed-wing, and helicopters, says CCSO. Additional searches for Landry are being planned and organized. 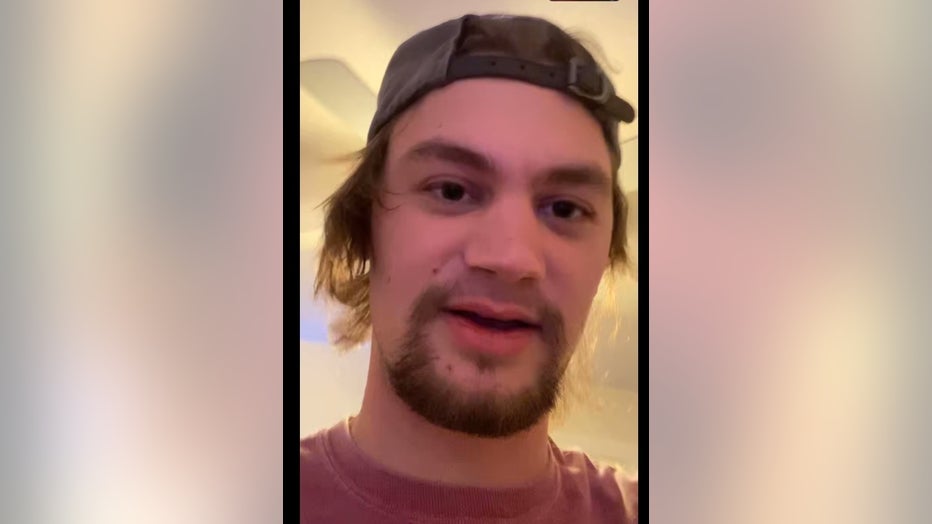