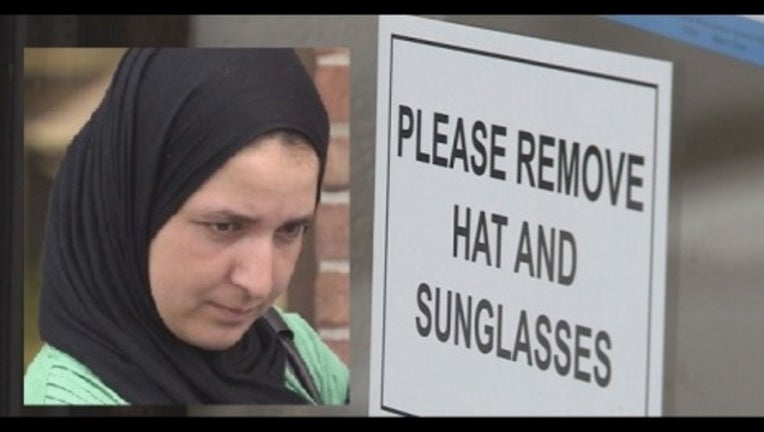 DETROIT (FOX 2 WJBK)- Take off your hijab or take a hike - that's the message one local woman says she got from an Advance America Cash Advance store.

Remove hats, sunglasses and though the sign doesn't say it, no hijabs are allowed there either.

"The lady she told them just take it off a little bit and put it back," said Fatah Kamal, describing the exchange his wife Nadia had with a clerk. "She said I can't, 'I'm in a public place I cannot do that.'"

She was denied service because she refused to remove her hijab for both religious and cultural reasons."They should show not their hair or like their beauty to someone beside their very close family," Kamal said.

FOX 2 tried talking with the manager at the Westland Advance America location.

"If you want. any questions have to be directed to our public affairs department," he said.

Kamal says he spoke with an employee over the phone who said the hijabs raise safety concerns.

"If it was about safety, a woman couldn't just walk into any old bank in these United States of America wearing a headscarf and get served," said Dawud Walid.

Walid, from the Council of American Islamic Relations, says women can go to banks get their driver's licenses, even their passports while wearing headscarves.

CAIR is part of lawsuit against Advance America for denying service to Muslim Arab-American women. Nadia is not the first.

"This is really about ignorance it's really about fossilized policies and people being stubborn and not coming up to the modern time," Walid said.

FOX 2 reached out to Advance America but no response.

As for Fatah Kamal and his wife Nadia they say they won't go to Advance America any more.