More than 1,000 first responders and community members climbed 70 floors Saturday morning in support of the Leukemia and Lymphoma Society.

DALLAS - More than 1,000 first responders and community members climbed 70 floors Saturday morning in support of the Leukemia and Lymphoma Society.

They are trying to take the fight against cancer to new heights.

Six-year-old Max Hinijosa is proud to be next to his father and show off their team's support for blood cancer research.

It means the world to him since he has leukemia.

"This is my hero. He is a warrior. He's been just an amazing blessing in my life and the life of so many," Max’s father, Cristian, said.

More than 1,000 people joined the Leukemia and Lymphoma Society on Saturday in the fight to cure cancer by participating in the Big Climb event.

Climbers, many of whom are first responders, went up 70 flights of stairs to get to the top of the Bank of America Plaza - the tallest building in Dallas. 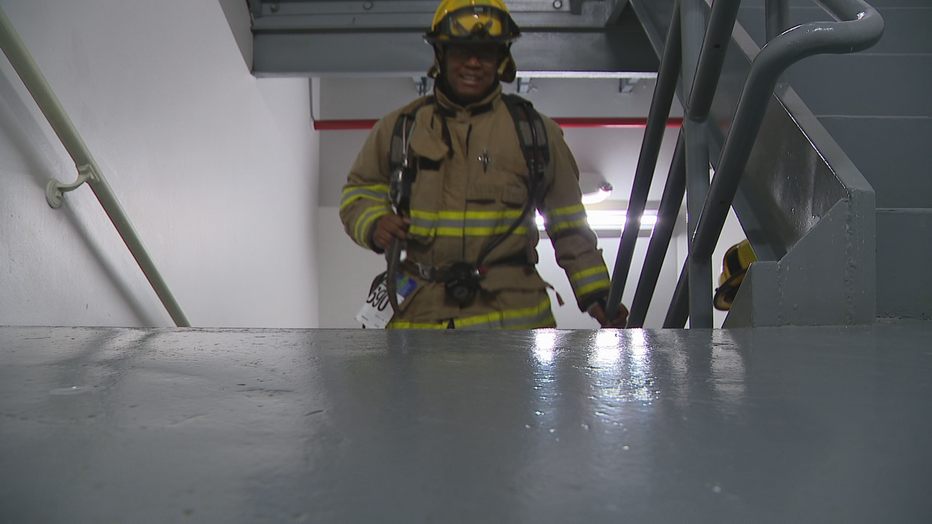 It's a difficult feat, but the executive director of the society's North Texas chapter said it's nothing compared to what those affected with cancer face every day.

"Obviously, the toxic chemo, radiation, but really transplants, as well, are just... it's a really horrible process,” Leah Swanson said. “But luckily, we are making a lot of strides and the process with immunotherapy is getting easier."

As people climbed the 70 floors, they got encouragement along the way, knowing they're doing it in honor of someone who has passed.

And climbing next to many people battling leukemia or lymphoma, like the event's honored hero: Ashley Beane.

"I feel better than ever. I’m almost two years post-transplant now. and I’m just looking forward to the next few years,” Beane said.

She stays positive knowing she has support from everyone around her, including her daughter.

“Think about those who need your help. Raise money, just keep going," she added.

That's what Dallas Fire Captain Cristian Hinijosa did, with his son, Max, on his back.

He said it was a celebration of his remission and bringing hope to others.

“I just want to share our story and let them know that this organization does change lives. It saves lives. they funded the research, they provided the medication, they're doing the real work,” he said.