At a press conference Friday with state and Minneapolis city officials, Walz urged calm amid the ongoing protests that saw looting, vandalism and arson in areas of the city, including a police precinct building burned Thursday night.

Walz said he spoke to Trump Thursday, but didn't know the president intended to tweet.

"It's not helpful. I did speak to the president last evening. At that point in time, it was in the process of where I said that we were going to assume control of this, that it was unncessesary," Walz said of Trump's tweet. "I did not know that he was going to tweet. He certainly can. It's just not helpful. It's not helpful.“

"The city of Minneapolis is doing everything they can," Walz said. "If mistakes are made and there's an accountability, we need to do that, but in the moment where we're at, in a moment that is so volatile, anything we do to add fuel to that fire is really, really challenging."

"So as I said, I spoke to the president," Walz said. "He pledged his support in terms of anything we need in terms of supplies to get to us. There's a way to do this without inflaming, and again this one is so difficult, as I said, again, the tools of restoring order are viewed by so many as the things that have oppressed and started this problem in the first place. So, it would just be more helpful at this point in time... if we need support from them, we will ask." 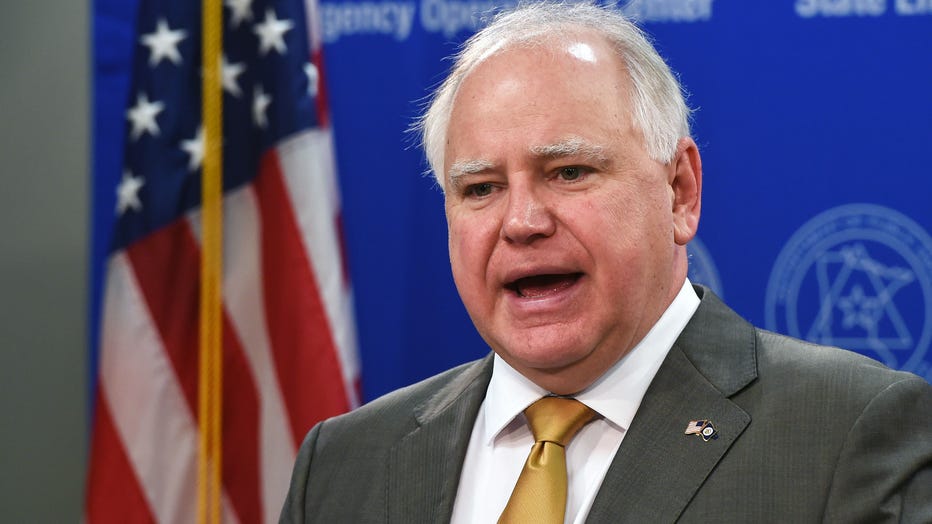 Walz pleaded with protesters to "help us create this space so that justice will be served, and it is my expectation that it will be swift."

Twitter escalated tensions with President Donald Trump on Friday, adding a warning to one of his tweets for the first time and saying he violated the platform’s rules by glorifying violence when he suggested protesters in Minneapolis could be shot.

“These THUGS are dishonoring the memory of George Floyd, and I won’t let that happen,” Trump tweeted about the protesters. “Just spoke to Governor Tim Walz and told him that the Military is with him all the way. Any difficulty and we will assume control but, when the looting starts, the shooting starts. Thank you!”

Twitter did not remove the tweet, saying it had determined it might be in the public interest to have it remain accessible. But the tweet was hidden so that a user looking at Trump's timeline would have to click on the warning to see the original tweet. Hiding it also effectively demotes the tweet by limiting how users can retweet it and ensuring that Twitter algorithms don't recommend it.

“We’ve taken action in the interest of preventing others from being inspired to commit violent acts, but have kept the Tweet on Twitter because it is important that the public still be able to see the Tweet given its relevance to ongoing matters of public importance,” Twitter said on its communications account.

Trump took to Twitter to complain, calling multiple times for the revocation of Section 230, part of a 1996 law overhauling telecommunications. That section generally protects social media platforms from liability for material users post on their platforms. Trump on Thursday signed an executive order challenging those protections.

The Trump tweet that was flagged Friday came amid days of violent protests over the death of George Floyd, a handcuffed black man who pleaded for air as a white police officer kneeled on his neck.

Walz on Friday acknowledged the “abject failure” of the response to the protests and called for swift justice for police involved in Floyd's death. The governor said the state would take over the response and that it’s time to show respect and dignity to those who are suffering.

“Minneapolis and St. Paul are on fire. The fire is still smoldering in our streets. The ashes are symbolic of decades and generations of pain, of anguish unheard,” Walz said, adding. “Now generations of pain is manifesting itself in front of the world — and the world is watching.”

RELATED: CNN crew released after being arrested while reporting live in Minneapolis