Clif White passed away after a six-month battle with a rare form of bladder cancer. He was diagnosed with stage four cancer in May.

Clif White passed away after a six-month battle with a rare form of bladder cancer. He was diagnosed with stage four cancer in May.

The 37-year-old’s colleagues said they had a birthday party for him Saturday evening, but just hours later, he died in his sleep.

Even through three rounds of chemo and multiple surgeries, White continued to coach his freshman football team and assisted the varsity team.

Sunday was a somber day on the Midlothian High School campus.

Students, faculty, and community members entered the arena for a reason many weren’t ready for after white died overnight.

Sunday’s gathering was originally planned to be a birthday celebration for the coach, but it was a safe place to grieve, which was a special request from White’s wife.

His student body also wanted to make sure his life was celebrated.

"His spirit will live on in our locker room for both football and softball. He’s been here 12 years. Just a special, special gift," Midlothian’s head football coach Doug Wendel said.

White was diagnosed with Stage IV urachal cancer in May, a rare form of cancer that develops when you’re still in the womb.

Wendel calls White an inspiration to the entire city.

"Just been a beacon of light to our students and faculty and athletes representing Midlothian High School really well," Wendel said. 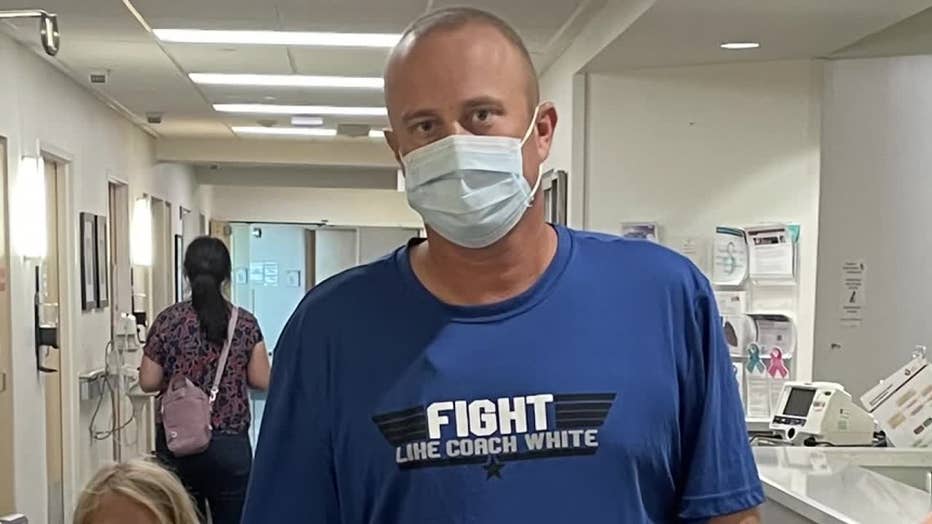 FOX 4 spoke to coach White and his wife, Meagan, just a few weeks ago on homecoming night.

"Do what you’re supposed to do, have fun doing it, and we’ll party at the end. Yes sir. I love every one of y’all," White told his team.

White walked the sidelines with his oxygen pack to make sure his Panthers brought home a win.

However, White still showed up to work.

Sunday, Wendel met with his team.

"There is no question his expectation would be to practice tomorrow and play this week," he added.

For months, the Midlothian community rallied to raise money for medical expenses.

A community that will continue to surround the White family during this unimaginable loss.

Midlothian, which is undefeated this season, has a home game on Friday. They plan to play and honor coach White along the way.