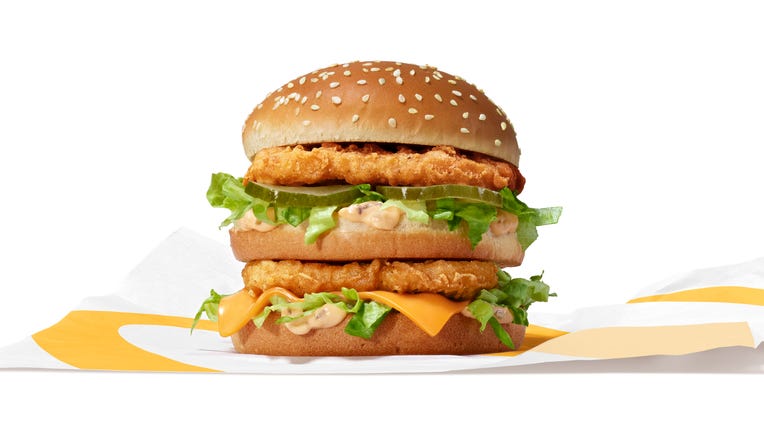 CHICAGO - It looks like McDonald’s is beefing up its fight in the chicken sandwich wars with the Chicken Big Mac.

The fast-food chain recently announced its latest addition to the menu, which will be available for a limited time at select Miami restaurants later this month.

"We're always looking to give our fans more ways to enjoy the classic menu items they know and love," the company said in a statement to FOX Television Stations.

The Chicken Big Mac will be made with two tempura chicken patties, pickles, shredded lettuce, and American cheese.

The Chicken Big Mac was introduced in the United Kingdom to rave reviews, according to the company.

Bear chows down on McDonald's after smashing car window

The tiny town of Jackson, New Hampshire, is dealing with a bear that's become a big nuisance.

"Chicken continues to be a significant opportunity for us … We've got some great global equities already in our McNuggets and with McChicken, but we also have some equities in McCrispy and McSpicy that we think we've got an opportunity to do more with globally. So that's going to be a priority area," McDonald’s CEO Chris  Kempczinski said in a Q2 earnings call.

The introduction of Popeyes’ chicken sandwich in 2019 sparked a Twitter feud between the chain and Chick-fil-A. Since then, other chains have started offering chicken sandwiches.

Nancy Hopkins, former food director of Better Homes & Gardens magazine, and a veteran food editor for over 20 years, had this to say: "America loves anything crunchy, salty, crackly, and good. And Americans love chicken, just about any way."

The Associated Press and FOX News contributed to this report. This story was reported from Los Angeles.