This means vaccinated or not, anyone who enters the courthouses must wear a mask.

According to an order signed by Moore, starting Monday, masks will be required at all Dallas County courthouses, and any individual who refuses to comply may be prohibited from entering, that includes the George Allen Building, the Crowley Courthouse, and the Henry Wade Juvenile Justice center.

"These are individuals who have been summoned, so I have the responsibility so that when they do come and serve that, I have done everything to ensure their health and safety," Judge Moore said.

"Sometimes, as a community, you have to work together and say it may be uncomfortable, but it’s the right thing to do," she explained.

Abbott doubled down and defended this decision, saying this provides "clarity and uniformity on the state’s fight against COVID-19."

"There will not be a discussion of a conflict because one does not exist," Moore said. "He does not have the authority to control the courtrooms and I don’t think he intended to."

In her signed order, Judge Moore cites the judiciary authority to take their own reasonable actions to avoid exposing court proceedings to the threat of COVID-19, according to the Texas Supreme Court.

"The judiciary, that’s our lane, and we have a responsibility. We can’t delegate it to the governor. We have to take responsibility for the health and safety for those in our courtrooms," Moore said. 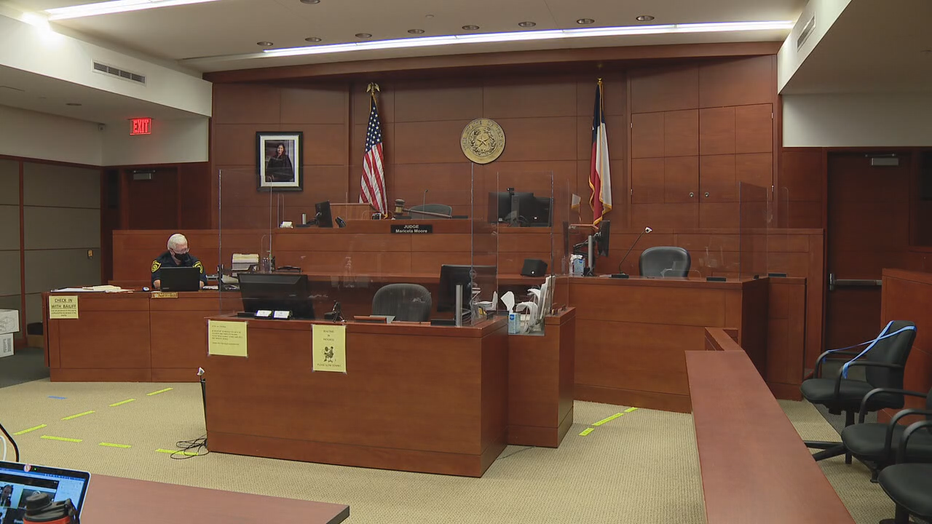 "The courts really do have their own separate functioning in our system and you can’t just tell them what to do," SMU law professor Dale Carpenter said.

Carpenter said Judge Moore’s order will stand due to limitations on the governor’s power.

UT Southwestern’s most recent projections show that Dallas is bracing to surpass hospitalization numbers from last summer as the Delta variant spreads.

As of Sunday, the state recorded 1,500 people hospitalized with COVID-19 in North Texas. The vast majority, according to health experts, are unvaccinated.

And in Tarrant County, it predicts 1,100 to 2,000 hospitalizations by mid-August.

"If that means that we have to put in certain safety protocols as simple as someone wearing a mask so someone has their right to a jury, that is what we are going to do," she said.

FOX 4 reached out to Gov. Abbott’s office for a comment, but hasn’t gotten a response back yet.

Last week, Judge Moore put civil court hearings that occur in–person on pause to reassess their COVID-19 precautions. Those are back on starting Monday, along with the mask requirement.