A McKinney family is working to create a legacy for their twin boys who were born four months early at just 24 weeks.

McKINNEY, Texas - A McKinney family is working to create a legacy for their twin boys who were born four months early at just 24 weeks.

While Paxton died after just 10 days, his brother, Rhett, is now 14 months old and doing well.

The family has joined forces with March of Dimes to raise awareness about premature babies and the research that helps them.

"Premature babies are fighters. When we watch him eat, scream for a biscuit, you would never know he spent four months in NICU being fed by a tube," Larissa Cannon said.

Shelby and Larissa Cannon are so thankful as they watch Rhett develop as a healthy boy.

"Pre-term labor is nothing you can be prepared for," Larissa said.

Larissa was having a normal and healthy pregnancy with twins when, for an unknown reason, she went into labor at just 23 weeks.

"He was born at the end of the snowstorm 2021," Larissa recalled. "I went into labor at 23 weeks and five days. Weren’t able to stop it."

"We truly believe Paxton’s brain bleed is why I went into preterm labor. They were severe and causing issues. Had I stayed pregnant, we don’t know if Rhett would be here today. We truly believe it was Paxton’s way of protecting his brother by having me go into labor early," Larissa said. "His brother was one pound nine ounces. Rhett was one pound four ounces. He fit in the palm of our hand."

"A year ago, our lives revolved around the hospital. We are both nurses. We would wake up an hour early to go to NICU. Go in for our 12-hour shifts and then the next day do it again," Larissa said.

The Cannons immediately used their sons' story to help other babies. 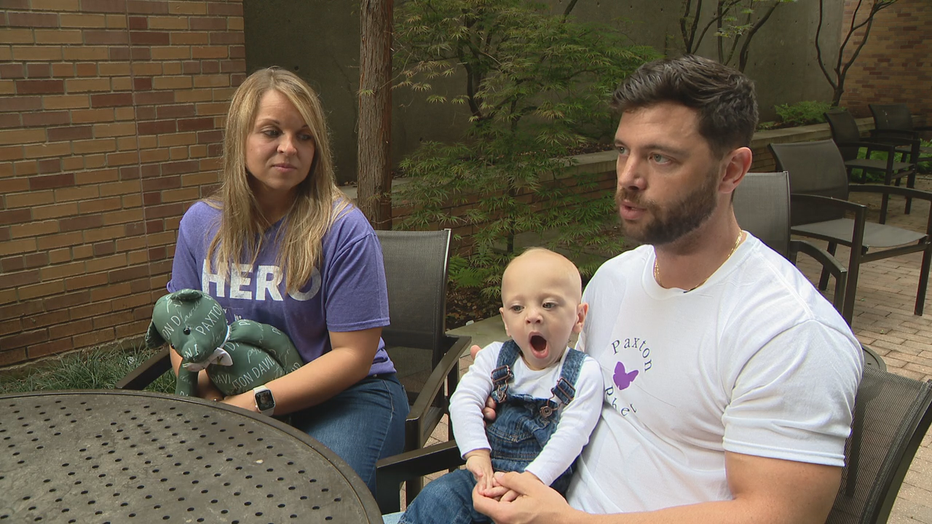 They joined forces with the president of Texas Health Dallas. While Rhett was still in the NICU, Shelby and Jim Parobek walked 26 miles in the March of Dimes' March for Babies, raising $28,000.

"Rhett was born at an age where his lungs would not have been able to expand and contract," said Kimberly Robinson, who is senior director of donor development for March of Dimes.

Robinson said the money raised goes to fund research that helps save the lives of premature babies.

"We funded a researcher who found synthetic form of surfactant," Robinson explained. "It is a hormone that babies create in last few weeks of gestation and help lungs expand and contract."

Rhett celebrated his first birthday in February, but if he had been born on his due date, he would still be waiting for that birthday until next month.

"Now, to see that he is independent and getting into so much stuff. It is crazy to see how far we have come in a short time," Larissa added.

March of Dimes has two walks coming up, one on May 7 in Fort Worth and the other on May 14 in Dallas.

Click here for more information on March of Dimes' March for Babies.