When rescuers found Harold McQuaggle clinging to tree limbs, they knew they didn’t have much time. But first responders and a good Samaritan didn’t hesitate to jump in.

FORNEY, Texas - When rescuers found 68-year-old Harold McQuaggle clinging to tree limbs Saturday, they knew they didn’t have much time.

But first responders and a good Samaritan didn’t hesitate to jump in.

"I was running back and forth across this bridge trying to figure out how to get down here," the good Samaritan, Daniel Washburn, recalled.

McQuaggle’s family found it hard to put into words.

"I don’t know, we had to take it all in," Harold’s brother, Randall, said.

Harold’s ordeal began the day before, when he was driving his truck on a service road near the Trinity River Friday night.

It was dark, so he couldn’t see that the road actually became flooded by the water.

He continued to drive his truck through, but it became stuck, and he stayed there for quite some time.

"But it was late and he was confused and he ended up going through those barricades before the rains flooded all of that over there," Randall said.

Harold said he called friends for help, but didn’t know exactly where he was, and they couldn’t locate him.

He said he didn’t want to call police and be bothersome.

Since the truck wasn’t fully submerged, a relative said Harold stayed inside overnight. He then tried leaving Saturday morning.

"I guess he had tried to walk out of here, and got swept by the Trinity River down there," Randall explained. 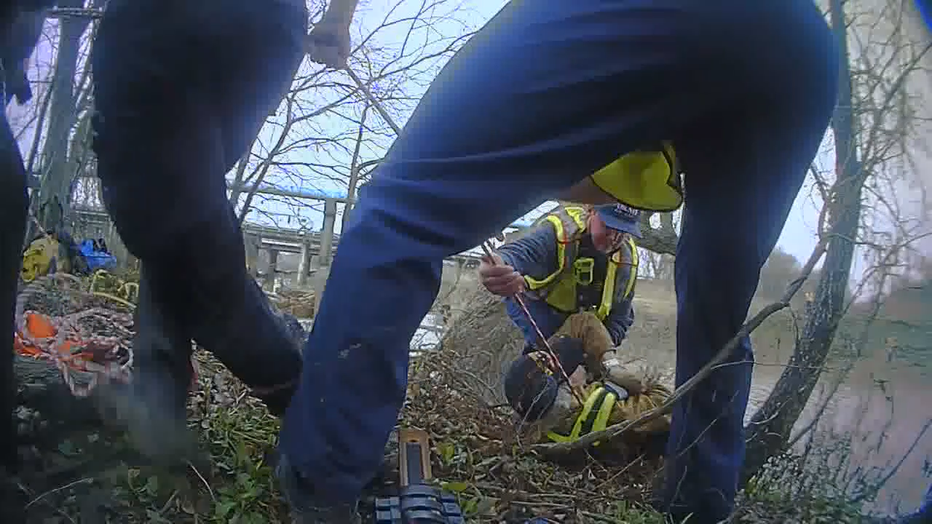 He was swept away along the river, and he grabbed ahold of tree branches and called 911.

"He had just enough battery to get through to us and kind of get us in the general area," Forney Police Department Officer Laramie Kennedy said. "And that’s when I heard just a faint yell and I saw just the top of his head. I could see a little bit of grey hair."

Officers arrived around the same time Daniel Washburn was driving by. He saw the commotion and thought he could help.

"It looked like time was of the essence, so I just wanted to…to run over there and grab him before he just went on down the river," Washburn said.

"And I just grabbed him, and I was like, ‘Dude, you just relax, I’ve got you. You ain’t going nowhere. I’ll get you out of here,’" he recalled.

Harold, who is now home from the hospital said he was in the river for nearly an hour.

"That gentleman in the plain clothes that I held onto, if it hadn’t been for him, I wouldn’t have made it," he said. "That gentleman just held onto me. I thought we both were going down the river at one time."

His message to the ones involved is thank you for saving his life.

"This guy, he was right behind me the whole time, never missed a beat," he said. "I think God put us here in the same place at the same time for a reason."

Harold’s truck was able to be pulled out by some of his family on Sunday.