Millions of Texans are now dealing with another cascading crisis triggered by this winter storm: access to water.

Millions of Texans are now dealing with another cascading crisis triggered by this winter storm: access to water.

Demand is so high that providers can't keep up and water pressure is dropping.

Most cities in North Texas have either issued a boil water notice or at least a conservation warning.

Among the cities issuing a boil water alert are: Denton, Mesquite, Arlington, parts of Fort Worth, Keller, University Park and Kennedale.

Before now, people have been told to drip their faucets to save their pipes. We're hearing that bursting pipes are part of the problem.

Like many Texans, Caleb Villareal woke up frigid Tuesday morning. He’s less worried about himself and more about his and his wife’s nine-month-old son.

"I walked to the thermostat and it was 33 degrees in the house," he said.

The power would return, but Villareal’s water went from low pressure to gone. They are finding it difficult to do essential things, like clean their baby’s bottles. 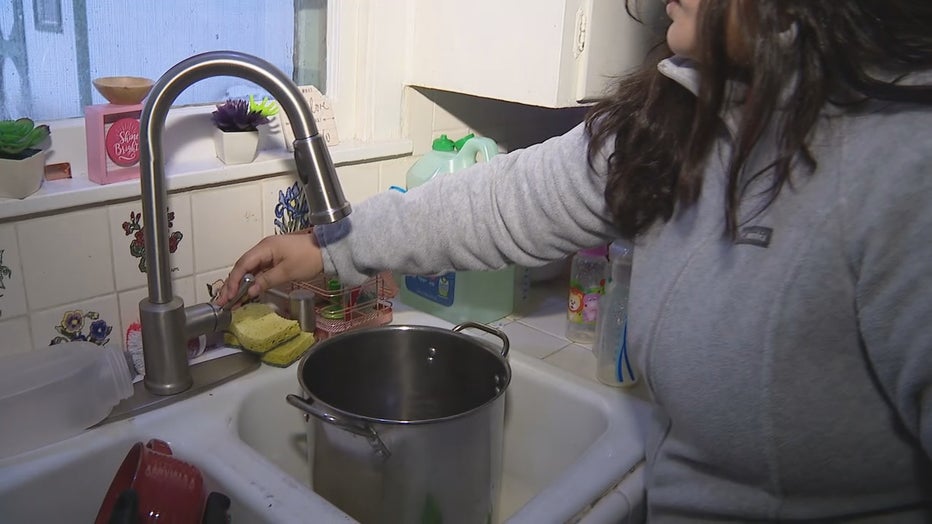 "I don’t know how much longer we’re supposed to go," he said. "Because if you pay your bills every month and everything, you have water and you have electricity. And that’s how it’s supposed to be."

Arlington issued a boil water notice Wednesday and warned of low water pressure. While it had some main breaks affecting customers, the city says much of the issue was due to high demand.

"We think it was just all of those leaks showing up at one time," said Arlington Water Utilities Director Craig Cummings. "And it’s kept us very, very busy."

There are boil water advisories or the threat of advisories across much of the metroplex.

The state believes at least seven million Texans and counting are now suffering from some sort of water issue.

"I really feel bad for the situation that our citizens are in. We’re getting hit from every end now," said Jerry Cosgrove, Plano Director of Public Works. "The gas is short. The electricity is short. We never want to be in this situation."

Plano says for now it’s got enough water to avoid a boil advisory, but it’s asking residents to conserve.

The city gets its water from the North Texas Municipal Water District, and Cosgrove says there's a number of issues, including high demand, frozen pumps and frozen pipes.

"There are so many frozen pipes that we are about four hours behind getting to people so we can turn it off at the meter," he said.

People have turned to a wide range of solutions. Some have been melting snow for water.

Dalia Sanchez’s family lives in Aubrey and loaded up on tubs to fill with water before the storm. They are now under a boil water advisory. Her stockpile is helping, but not with everything.

"We haven’t bathed our kids. We did quick showers for ourselves, but our kids can wait," she said. "And we’re not doing any washing of clothes or anything, just the bare necessities."

A power crisis is now morphing into a water crisis for Texans.

When it will end — like so many questions nowadays — is unclear.

"My frustration level is through the roof," Villareal. "I think if people would have known beforehand, it would have been a lot easier for us."

There's been mixed messaging on whether you should drip faucets. Bottom line is you have to decide what's best for you.

If you have electricity and can open your cabinets to let warm air circulate around pipes, that is ideal.

If you don't, drip faucets so your pipe doesn’t burst.