LANCASTER, Texas - A teenager from Lancaster High School made it his mission to spread an important message on Mental Health Action Day.

Kaiden Drain, 17, was part of the first of its kind effort to increase mental health awareness by calling on people to take actions that can help support and improve their own mental health. Drain was among those who spread the message through social media and people they know.

Drain created and emailed a flyer to classmates, family and others he knew. It asked them to participate in the non-profit organization DoSomething’s campaign named #WhatsNotPictured.

"I said post it because no matter what you say, someone will read it, and someone will think to themselves ‘You know what, I never knew about this person.’ Posting a picture may look good, but you never know what’s behind the picture," Drain said. 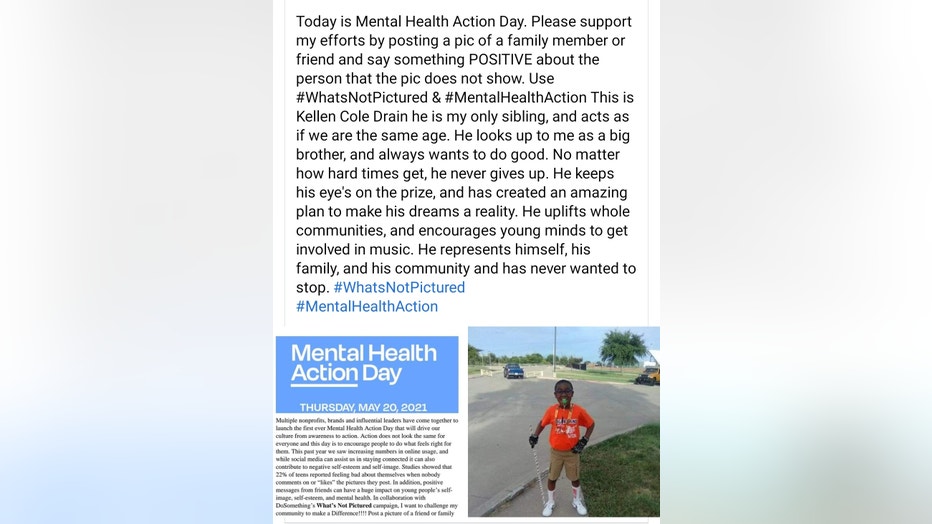 Drain acknowledges there’s a stigma around mental health. He said people are uncomfortable to talk about their issues, do not have anyone to talk to or that they even try to handle it themselves. He describes how his parents reference the topic as being "the elephant in the room."

"I think it’s important for individuals to take care of their mental health because mental health can tear down the soul. Mental health has taken a toll on many people’s lives and has caused some people to even take their lives and the pain of someone losing a family member or a friend to mental health tears that person down completely," Drain said.

One classmate touched by Drain’s initiative is Dajaiya Pegue, 17, who has experienced issues with mental health herself.

"This day is really significant to me. As a teenager, we go through a lot of things. Just to take a day for friends to reach out to me… opens up my heart because it’s hard for me to deal with certain things," Pegue said. "Stress with assignments, getting them in on time, and also dealing with extracurricular activities, how to balance that all out, and it just puts a lot of weight on me… I also have to babysit my sister and my cousin; it’s a lot on me and weighs me down."

Though Mental Health Action Day is only one day, Drain wants its message to not be forgotten.

"Although this was the inaugural… every city, county, town, province- everything, everyone should know about it," Drain said.