FOX 4's Shannon Murray talked to two amazing athletes who will do something others might find impossible.

FORT WORTH, Texas - Some amazing athletes – amputee athletes – will run this weekend’s Cowtown Marathon in Fort Worth. It’s both a physical and mental challenge for them.

To run a long distance, it takes mind over matter. For Jennifer Clark and Roy Martin, maybe even more so. They run with just one leg.

“I think one of the biggest parts is the mental part,” said Martin.  “I didn’t know how strong I was until this happened.”

“That was one thing I was determined to do as an amputee. I was gonna run,” Clark said.

Twelve years ago while pregnant with her third child, Clark developed a rare, non-cancerous tumor behind her knee.

“So it grew the whole nine months and so by the end of the pregnancy, it was so big that I couldn’t bend or straighten my leg. I was in constant pain, deep depression. My only options were to live with it or have my leg amputated above the knee,” she said.

She chose to amputate.

“He was about 9 months old when I had the surgery. It was a running joke in our house. We were racing to see who was going to walk first,” she laughed.

Now with a running prosthesis, she’s doing much more than walking.

“It was hard at first. At first, it was mailbox to mailbox if I could make that,” Clark said. 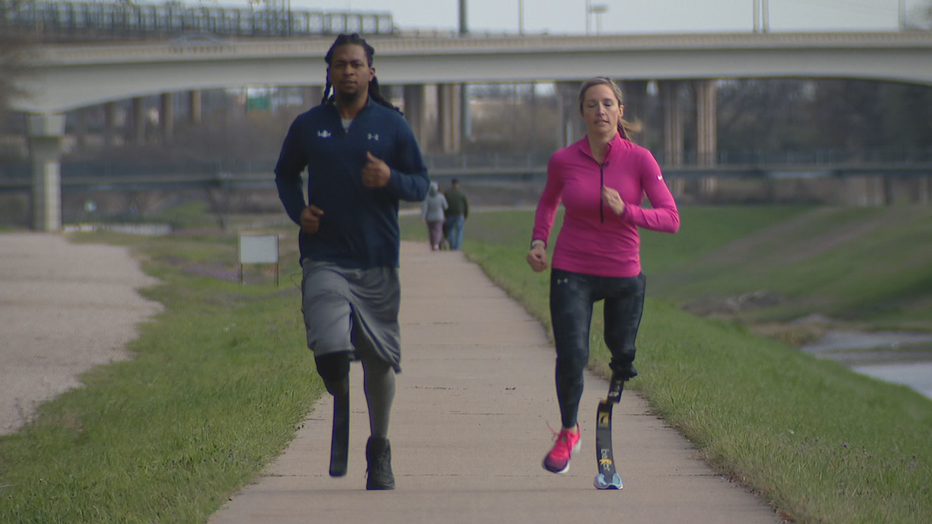 Since then, she’s competed in triathlons and long-distance runs. She ran her first Cowtown 10K in 2012. And this weekend, she and Martin will both run the 6.2-mile race.

Martin lost his right leg seven years ago in a machinery accident at work. His grandfather, a veteran, also lost a leg while serving and inspired him not to give up.

“He didn’t have the funds to get a running leg. He misses running, hitting the wind hitting his face, his hair. When he told me that story it made me want to run,” he said. “I started off running for him pretty much and then I started running for myself.”

Now Martin runs for himself, his wife and his four children.

“I do my best to try to always be positive around them and stay active and doing stuff,” he said.

Besides running, Martin took up boxing with the National Amputee Boxing Association.

“I never wanted my kids to see me down or feeling sorry for myself, anything like that. It was always get up mode for me, adapting to every step forward, you know?” he said.

Every step is an accomplishment and a reminder to everyone to keep moving forward.

The 10K race happens Saturday morning. The Cowtown marathon and half marathon are Sunday.