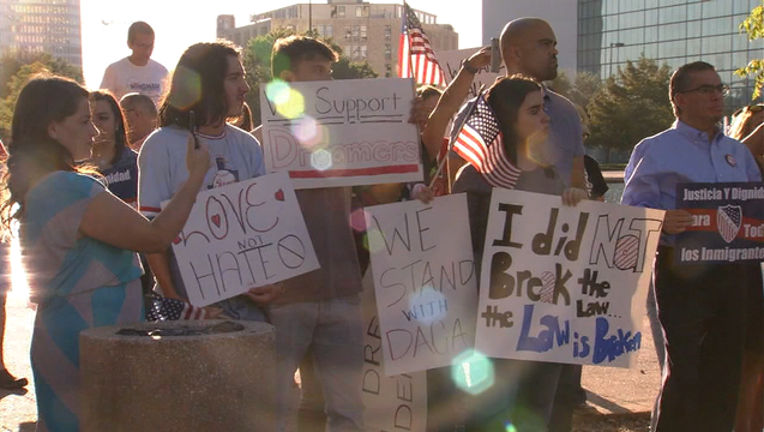 WASHINGTON (AP) - Backed by the White House, Democratic and Republican lawmakers dug into a politically fraught search for compromise on immigration Wednesday, seeking to take advantage of a window of opportunity opened by President Donald Trump. They're under pressure to find a breakthrough before a deadline next week that could lead to a government shutdown neither side wants.

Democrats want urgent action to stave off deportation of some 800,000 immigrants currently protected by an Obama-era program called Deferred Action for Childhood Arrivals, or DACA. Trump still wants his border wall, though he's toned down what that means. Conservatives are watching with a wary eye, fearing he will strike a soft compromise that could infuriate their - and his - political base heading into this year's elections.

The No. 2 lawmakers of each of Capitol Hill's quadrants of power - Republicans and Democrats in both House and Senate - touched gloves Wednesday afternoon, deputized for action at what appears to be a moment of genuine opportunity to break Washington gridlock.

"Everybody wants to find a deal there, myself included," said Republican Rep. Mark Meadows of North Carolina, chairman of the stoutly conservative House Freedom Caucus. "It better be good, because that particular issue is really one of the issues that got this president elected. He can't afford to make a mistake."

The Democrats talk most about DACA, the program protecting immigrants who were brought to the U.S. as children and are now here illegally. Many have only known America as their home and are viewed sympathetically in opinion polls and among most lawmakers.

Meanwhile, Republicans are heartened by an agreement to discuss other issues, such as border security and Trump's long-promised wall, as well as limiting a preferential "chain migration" system that gives advantages to the relatives of legal immigrants.

Trump no longer talks about the "big, beautiful wall" spanning the length of the U.S.-Mexico border, as he did in the election campaign, but he is demanding some elements of it as part of any agreement.

Outside of Washington, conservative columnist and author Ann Coulter warned Trump after a White House meeting on Tuesday in which he struck a conciliatory chord on immigration.

"As he considers the utility of walls (and promises), @realDonaldTrump should consider that 'Never Trump' was toothless, but 'Former Trump' will bite," Coulter wrote on Twitter.

But inside the Capitol among the GOP rank and file, most seem to be either supportive of the negotiations or taking a wait and see approach. Everyone has long known that bipartisan talks on both immigration and increasing the crunching spending limits on both the Pentagon and domestic agencies were inevitable. It's no secret that the results of the bipartisan, leadership-driven negotiations are likely to produce results that anger the hard right, but less strident Republicans seem to be comfortable, at least so far.

"I think most like where it's going," said freshman Rep. Don Bacon of Nebraska. who represents a competitive district anchored by Omaha and is sympathetic to DACA immigrants. "There's some exceptions but there's a general consensus that that is what we need to be doing. And I think that this is an area that's tailor-made for a bipartisan solution. We both want some things here."

Immigration is just one side of the equation. Also at stake is a deal on spending that would uncork tens of billions of dollars in higher Pentagon spending this year alone, along with money sought by Democrats for domestic programs. Democratic votes are needed to advance such legislation, but top Democrats including Senate Minority Leader Chuck Schumer of New York won't agree to a budget deal unless DACA is dealt with first.

Republicans had long fought perceptions that the two issues were tied together, but they're dropping that pretense now.

"When it comes to how conservatives react to the notion that these things are being linked in discussions, it's sort of nothing new," said Republican Rep. Matt Gaetz of Florida. "I think a lot of folks want to see the final product, but I haven't heard some wide-scale revolt to the fact that people are having discussions."

Conservatives in the think tank world said they were heartened that the negotiations had broadened to so-called chain migration and an immigration lottery that's aimed at promoting diversity.

"I think that for some people, yesterday was a bit of a shock to see just how eager (Trump) is to pass amnesty," said Roy Beck, executive director of NumbersUSA, which advocates for reduced immigration rates. "We were worried that the wall was going to be the big get. ... I think we're thrilled to be in as good a shape as we're in."

Still, frustration is brewing that Republicans aren't doing better after winning control of the White House and Congress in 2016,

"Somehow Chuck Schumer still gets to dictate, 'Oh, I get $60 billion more in non-defense spending, and I get to determine ... DACA,'" said Rep. Jim Jordan, R-Ohio. "How does that make any sense?"

Though both sides' leaders seem eager to settle the issue, uncertainty remains over exactly how - and by whom. Underscoring that, there were two groups of lawmakers seeking an immigration compromise: a handful of senators from both parties who've been meeting on immigration for months as well as the No. 2 Republican and Democratic leaders who just started their gatherings.

"They want to be engaged in the conversation in hopes that it will build a bipartisan consensus," Senate Minority Whip Richard Durbin, a member of both groups, said of the second-ranking leaders. Asked if this group would be helpful, he said, "Too early to tell."

Meanwhile, a group of House Republicans, led by Judiciary Committee Chairman Robert Goodlatte of Virginia, unveiled their own immigration bill Wednesday, a measure that embraces conservative goals but would seem to have little chance of ultimate passage. It would reduce legal immigration levels by 25 percent, block federal grants to "sanctuary cities" that don't cooperate with federal authorities on immigration issues and restrict the number of relatives that immigrants already in the U.S. can bring here.