The city of Keller will hold a special closed door meeting to address a lawsuit claiming Keller police officers used excessive force against a man recording his son's arrest.

The incident happened back in August, and the lawsuit was filed two weeks ago.

That prompted the city to release dash and body cam video.

Within hours of the incident, the city dismissed all charges, released the father from jail, and reimbursed the fines related to the traffic stop.

Body and dash cam video released by the city of Keller show the traffic stop on August 15 that escalated into a father and son being arrested.

"Step out right here," Keller PD Sgt. Blake Shimanek said in the video. "Why are you acting so suspicious?"

Shimanek said he pulled over Dillon for making a wide right turn.

"I'm walking up on a scene for a routine traffic stop and you roll your window up, what does that look like to me?" Shimanek said.

"I mean, I rolled it up for my safety," Dillon said.

During the stop, Dillon’s father pulled up.

"I knew it wasn't right, so that's when I immediately took out my video camera and started recording," Marco Puente recalled.

While Marco was recording his son's arrest from the sidewalk, Shimanek told another officer who arrived on scene, officer Ankit Tomer, to arrest him.

"Arrest him," Shimanek said during the incident.

"For what?" Marco asked.

"For blocking the roadway," Shimanek responded. 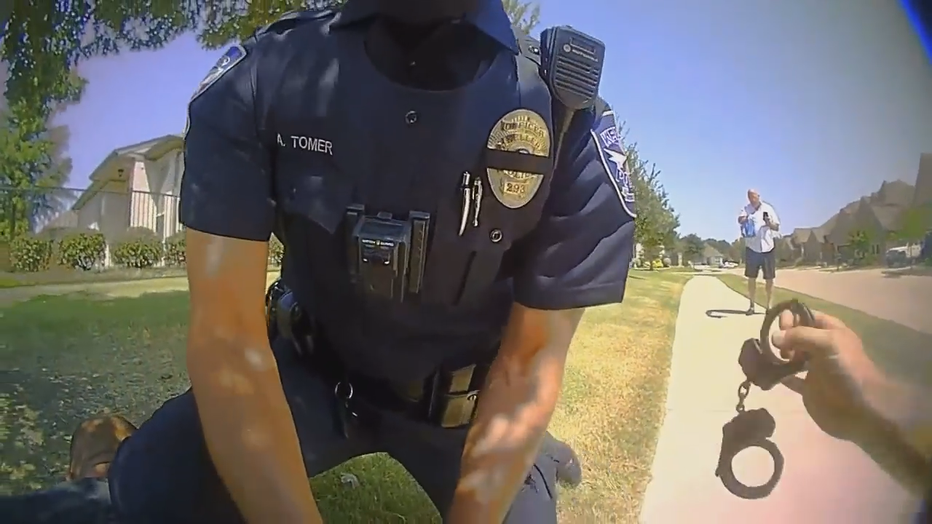 Puente's attorneys said he was not resisting arrest, yet officer Tomer pepper sprayed him in the eyes twice.

"That was totally unnecessary," Marco said during the incident. "My eyes are on fire."

"We'll get you medics in just a second to treat," an officer said.

After the father and son were under arrest, Shimanek explained to Tomer what happened before he got there.

"Cruising with his window down, I walk up and he rolls his window up. Acting extremely nervous," he said.

Within hours of the incident, Keller PD's command staff reviewed the case.

The charge of interference against Marco was dropped, and Keller's mayor said the Puentes were later reimbursed the fine from the traffic violation.

Puente said he filed the lawsuit because he doesn't want other citizens being treated like he and his son were.

"Some are saying maybe they need de-escalation training. There was nothing to de-escalate, he escalated everything," Marco said.

Shimanek was demoted after an internal review.

Officer Tomer was not disciplined.

Puente's attorneys, Scott Palmer and James Roberts, said there were multiple mistakes made.

"They used power of badge and assaulted a citizen standing there," Palmer added.

Keller's mayor said in a statement that he did not want to make any comments until the city council has been briefed privately and citizens have an opportunity to make comments next Tuesday.

Palmer said the question for the city is simple.

"When you misuse huge responsibility, does he deserve a badge and gun anymore?" he asked.

The city council is being briefed Tuesday night at 6 p.m. in closed session about the matter, and the public will have the opportunity to weigh in one week later.