There's plenty of video of the burning trailer and the truck that was towing it, but authorities do not have a description of the driver or a license plate to work with. It caused three grass fires, threatening several homes.

KAUFMAN, Texas - Authorities in Kaufman County want to find a driver who was seen towing a burning trailer that caused three grass fires.

There's plenty of video of the burning trailer and the truck that was towing it, but authorities do not have a description of the driver or a license plate to work with.

Several homeowners in Kaufman County are still dealing with hot spots on Monday from the weekend fire.

According to Kaufman County fire marshal,  the start of the fire appears to be accidental.

But what’s puzzling to investigators, is that the truck drove several miles with the trailer burning, didn’t call 911 and then abandoned the trailer on a bridge. 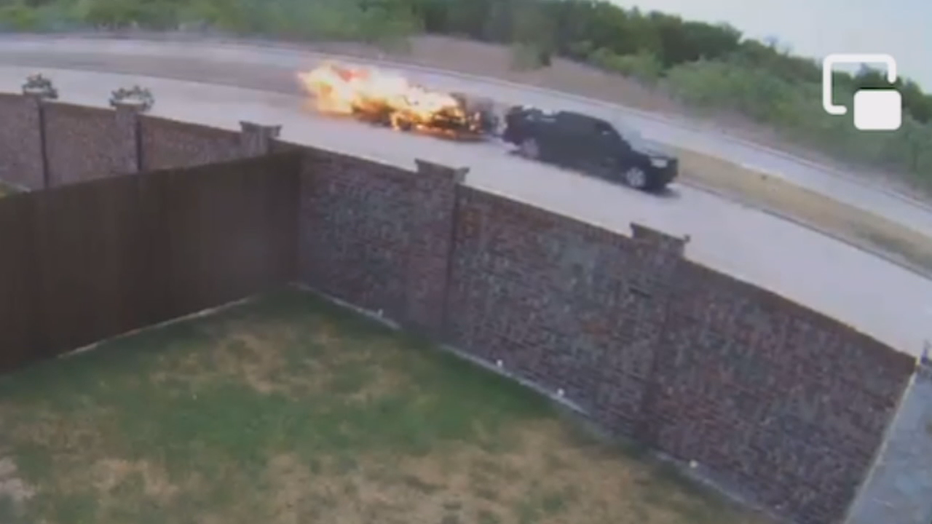 The difference between Lucy Wilson losing everything and her home still standing came down to inches.

"We were ready to have lost everything," she said. "It melted some of the skirting on this side."

Sunday, Wilson’s Kaufman County property was caught in the middle of three separate grass fires sparked by what investigators say was a moving, flaming utility trailer.

Investigators are still looking for the driver they say left a path of destruction while recklessly pulling the burning trailer for miles before ditching it on a bridge near the city of Kaufman and taking off.

Monday, fire officials revealed the truck is a black Ram 1500 Crew Cab, but the license plate is difficult to read.

Investigators say the bumper and tailgate are now likely damaged from the heat and flames.

Cell phone video shows the truck taking off as the fire rages.

Neighbors were using hoses and fire extinguishers. Families in a dozen homes were evacuated Sunday.

Scott Ford was among those who evacuated.

"They already had this put out when I got here," he said.

No one was injured in the grass fires. Only a few sheds were burned.

"It was just bizarre," Ford said.

Fire officials say charges are possible, but they want to talk to the driver first.

Wilson is wondering why the driver didn’t stop and call 911, instead putting families' lives and property in danger.

"You do not know you are at the mercy of nature," she said.

The Kaufman County mother kept a watchful eye on her torched property Monday, worried the flames could start up again.

Again, investigators are searching for a black Ram 1500 Crew Cab with fire damage to the back tailgate. They’re trying to see if any evidence from the burned trailer can link back to the owner, but there is severe burn damage.