During a visit to the Goddard Space Center in Maryland on Friday, Vice President Kamala Harris announced that she, along with other leaders of the Biden administration, will hold an inaugural National Space Council meeting on Dec. 1.

The move by the U.S. undercut a more than $60 billion deal by a French defense contractor to sell diesel-powered subs to the Australian navy. Biden didn't formally apologize to Macron but conceded the U.S. should not have caught France by surprise.

"The alliance between the United States and France is America’s oldest, and among our strongest," Harris said in a statement ahead of the trip. "I look forward to discussing with President Macron our work together on the most urgent challenges of our time —including the climate crisis, the global health crisis, and regional security concerns. We will also discuss new opportunities for collaboration in the area of space."

Harris started her trip by meeting with American and French scientists working on COVID-19 preparedness at the Pasteur Institute in Paris. She said the visit underscored joint determination to tackle global challenges, especially to end the coronavirus pandemic.

"Some of the most significant discoveries in science on any issue, from rabies to HIV-AIDS, to breast cancer, to mRNA and what we do around vaccines and pandemics, have occurred here in collaboration with French scientists, American scientists, scientists around the world coming together," Harris, a former California senator, said.

She also mentioned the institute's personal symbolism: Her late mother Shyamala Gopalan, who was a scientist, conducted breast cancer research with the institute’s scientists in the 1980s. 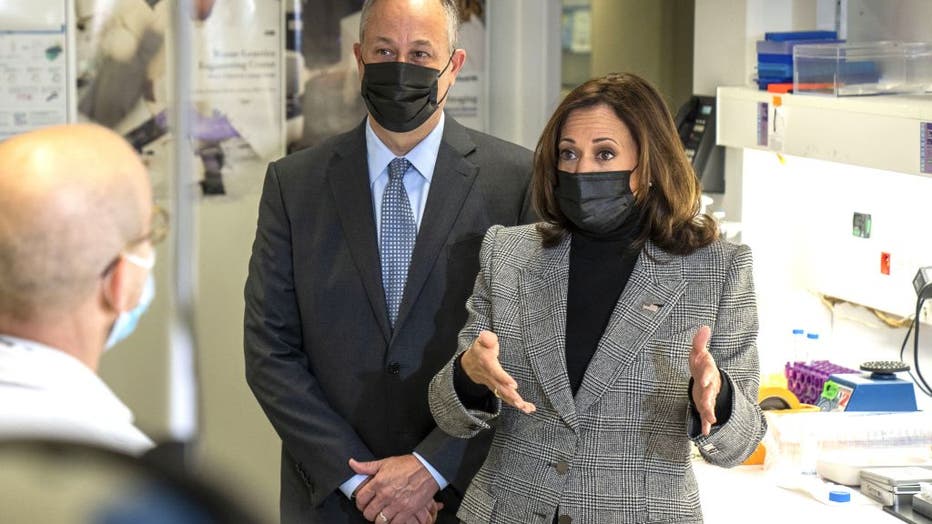 Harris is scheduled to sit down with French President Emmanuel Macron at the Élysée Palace on Wednesday for talks expected to focus on ways the two nations can better coordinate their efforts in the Indo-Pacific. The two are also expected to discuss global health, space and other issues.

On Thursday, she’ll deliver a speech at the Paris Peace Forum "to address the rising inequality that has been exacerbated by the pandemic," Harris’ statement reads.

The next day, she’ll attend the Paris Conference on Libya to "demonstrate our strong support for the people of Libya" as they plan for elections later this year. Libya has been engulfed in chaos since a NATO-backed uprising toppled longtime dictator Moammar Gadhafi in 2011. He was captured and killed by an armed group two months later.

The oil-rich country in North Africa was for years split between rival governments, one based in the capital, Tripoli, and the other in the eastern part of the country. Each side is backed by different foreign powers and militias.

The interim government now in charge was appointed in February after months of U.N.-backed negotiations to lead the country through elections. It includes the presidential council and a Cabinet of ministers that runs the day-to-day affairs.

Vice President Kamala Harris spoke about the "progress" made amid a "tough" situation at the U.S.-Mexico border during her first trip to the border in El Paso, Texas, Friday.

Harris is being joined on the trip by her husband, second gentleman Doug Emhoff, and their visit coincides with Veterans Day in the U.S. and Armistice Day in France. The two plan to mark the solemn commemorations with a visit to Suresnes American Cemetery outside Paris.