People across the country were rallying for voting rights Saturday, including in Dallas, where people joined up for an event against those who they say are trying to restrict voting access.

DALLAS - People across the country were rallying for voting rights Saturday, including in Dallas, where people joined up for an event against those who they say are trying to restrict voting access.

"So, more people are turning out to vote. They don’t like the demographics of those people to bring out to vote," organizer Sean Reed said.

At Dallas City Hall, opponents of the Texas voting law changes rallied in support of a bill in Congress, named for the late congressman and civil rights activist John Lewis, that would preempt many of the recent state laws enacted by Republican-controlled legislatures. 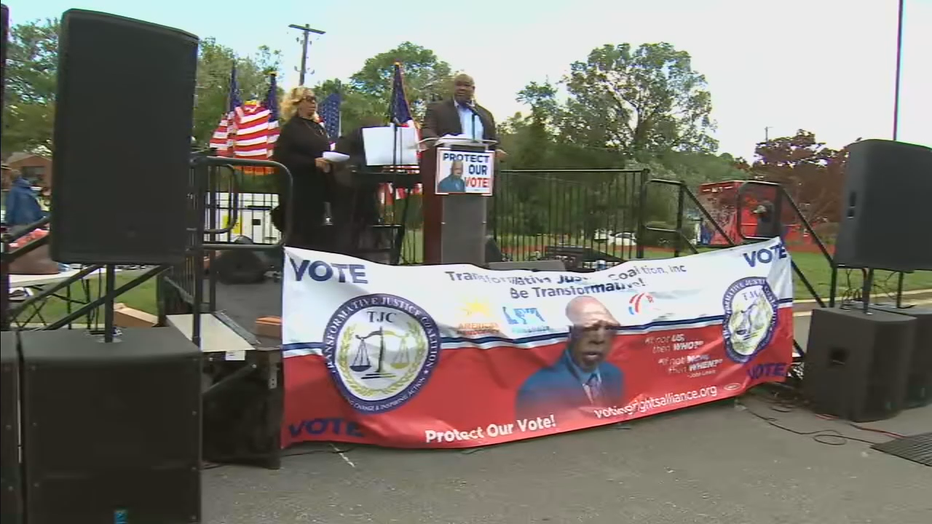 "Criminalizing giving water and giving snacks was a tactic in the 1960s to prevent registration," said Cheryl Wattley, professor of law at UNT Dallas.

"The big issue here is to what extent the state will roll back some of the liberalized voting procedures that came about as a result of the pandemic last year," SMU political science professor Matthew Wilson said. "Some of the things, like 24-hour voting, extended early voting, multiple drop boxes for absentee ballots, these are things that many in the legislature have wanted to roll back, but many community activists see as an important expansions of voting rights. And so the crux of the battle is how much of those pandemic measures will remain going for."

Wilson said each state is facing its own decisions.

"This will absolutely be a state legislative decision. Now, if state legislators cross the line to unconstitutional infringements of voting rights, that’s something that could be resolved in the courts," he explained.

There are controversial debates.

"The most likely thing to end up in court is the level of power that’s given to partisan poll watchers," Wilson said.

Poll watchers have somewhat limited access. They cannot observe everything election officials do. Some Republicans want to change that.

"But we’re not talking here about major overhauls to voting procedures. It’s really more nips and tucks around the edges," Wilson said. "So, at most, we’re talking about a rollback to pre-pandemic election conditions."

"There would be some level of conversation around electoral reform, regardless, because of all of the measures that were put in place in response to the pandemic in a hurry. States around the country had to adopt new voting procedures, dramatically expand absentee voting provisions," Wilson said. There would be a re-examination of that no matter what, but when you combine that with the concern about the election that was raised by President Trump, legitimate or otherwise, this is going to inspire a lot of people in the Republican base to push for and demand perhaps more dramatic action than would otherwise be the case."

Wilson believes some sort of change is coming in Texas.

"With Republicans in control of both houses of the legislature, it would be a colossal failure in the eyes of their base if they did not deliver some form of meaningful legislation," he said.

Ones siding with Democrats said they’ll keep fighting at the federal level.

"And we’re here to say we ain’t going to let you suppress our vote, because every time you try to knock us down, we’re going to bounce back, and when we bounce back, we always bounce back stronger than we did than when we went down," said Dr. Frederick D. Haynes, pastor at Friendship-West Church.

State Representative Brisco Cain, of Deer Park, the chair of the House Elections Committee, said he did make changes to the voting bill after listening to civil rights groups.

The John Lewis Voting Rights Act is unlikely to make it through the Senate, even with a tie-breaking vote from the vice president.