Irving police need the public’s help to piece together what lead to a missing woman’s death.&nbsp;

IRVING, Texas - Irving police need the public’s help to piece together what lead to a missing woman’s death.

Relatives of 24-year-old Amy Jasmine Hernandez put up flyers as they are desperately seeking information.

A police report was filed after she went missing from the Escapade 2001 nightclub in Northwest Dallas at 2:20 a.m. Sunday.

Relatives said a friend went to get the car so they could leave, but when she pulled up, Hernandez was gone. 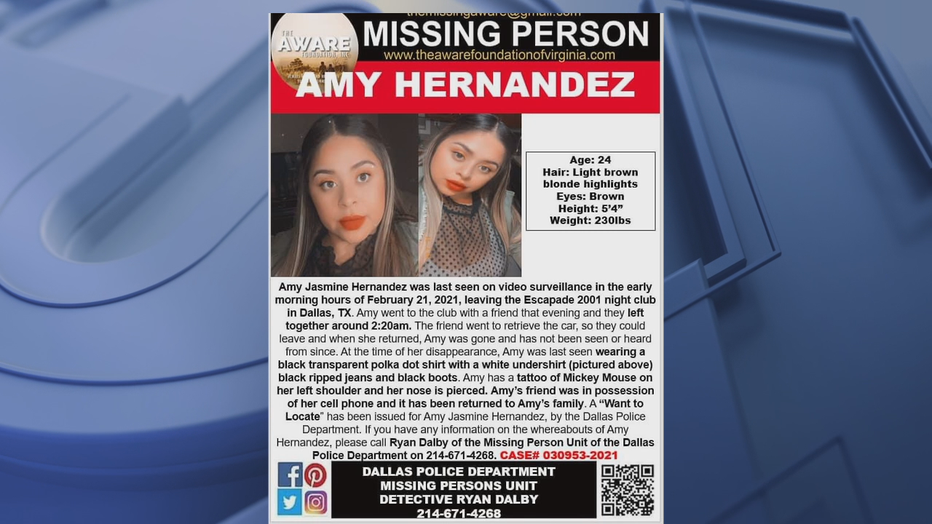 "The Dallas nightclub she was at is on the north part of Loop 12, right by 35, so just a couple of miles outside city limits of Irving," said Irving PD Officer Robert Reeves.

At about 4 a.m., a short distance away, Irving police received calls about a woman, which turned out to be Hernandez, who was struck by multiple cars on Loop 12 near Grauwyler Road.

Police say she’d gottena ride to the area, which is nowhere near her Seagoville home.

Hernandez’s family didn’t learn she’d been killed until a few days later, after they’d circulated the flyers and even organized searches.

Now that they know the sad truth, questions remain.

What Irving police want to know is what happened in that critical hour and a half or so between the time she was last seen at the club, and when her body was discovered on Loop 12.

"We do want to know how did Amy end up on Loop 12, if someone saw her on Loop 12, how long she might have been on there. Did a vehicle drop her off? Was she getting out of a vehicle? Any of those types of things or if anyone just saw her walking down the shoulder of the highway," Reeves said.

Police said the drivers who struck Hernandez all stopped, so they are not looking for anyone who left the scene.

But police do want the public’s help with any new information that will help them complete the picture of what happened to Hernandez, and offer her family some closure.