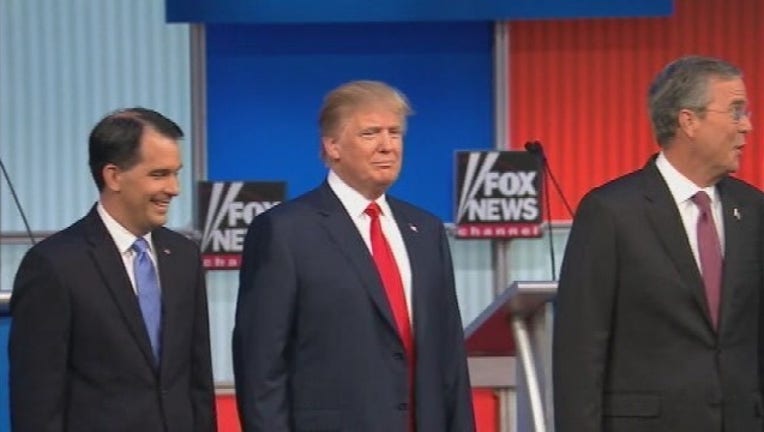 WASHINGTON (AP) — Eleven top-tier Republican presidential hopefuls face off in their second prime-time debate of the 2016 campaign Wednesday, in a clash between outsiders and establishment candidates under a cathedral of political conservatism.

Set in the Ronald Reagan Presidential Library in Simi Valley, California, the debate is expected to turn on a rapid-fire series of questions and answers on foreign and domestic policy and politics, according to sponsor CNN. More broadly, the question is about the viability of untested candidates challenged by experienced public policymakers, in a wide-open contest that counts as its front-runner a billionaire developer expected by many to have self-destructed by now.

Donald Trump will again be center-stage in the broadcast that begins at 8 p.m. EDT. He'll be flanked by retired neurosurgeon Ben Carson and former Florida Gov. Jeb Bush. The other candidates will be arrayed outward, with Kentucky Sen. Rand Paul and New Jersey Gov. Chris Christie on either end. Looming in the background: Reagan's presidential plane.

Some things to look for:

Against most expectations, Trump's candidacy hasn't self-immolated, and rivals have no choice but to take him seriously. "Now they're saying, oh, how do we stop this guy?" Trump said this week. "I haven't heard the word 'clown' in a while." Look for some Republicans — but not all — to try to work within short windows of speaking time to try to take him down, either explicitly or by comparison with themselves.

Before the debate, some candidates tested their approaches. Bush, who at the first debate called Trump's rhetoric divisive, told a crowd in Spanish that Trump doesn't think the former governor can speak the language. "Pobrecito" (poor guy), Bush said.

Former executive Carly Fiorina has dismissed Trump as "an entertainer running for president." Paul told The Associated Press on Tuesday that he wants to expose Trump as a fake conservative.

And Christie, who has little trouble being heard, complained Monday that Trump and his feuding partners are getting so much attention.

"We have to do the job to make sure that people hear our voices," Christie said of himself and his fellow candidates on Fox News' "The Kelly File."

"I hear they're all going after me," he said. "Whatever."

The stakes are particularly high for Bush. In this debate, though, there's no presumption that Trump's candidacy will collapse. Bush must distinguish himself from Trump as an able policymaker in his own right.

Judging from his recent comments, Bush will have his pick of examples from the past of Trump taking Democratic positions and saying nice things about Hillary Rodham Clinton, now the Democratic front-runner. He may try to call out Trump for his comments about immigrants, too.

To hone his approach, Bush trained for the debate with Peter Flaherty, a top aide to 2012 GOP nominee Mitt Romney.

Fiorina, the only woman in the Republican nomination fight, has crafted the first heavyweight response to a Trump insult. The super PAC supporting her campaign released a video this week, "Faces," in response to Trump's remark in a Rolling Stone interview in which he says of her, "Look at that face!" and "Would anyone vote for that?"

Says Fiorina in the video, "Ladies, look at this face, and look at all of your faces — the face of leadership." She goes on to say that hers "is the face of a 61-year-old woman. I am proud of every year and every wrinkle."

It's a clear poke at Trump's repeated insults of women, including his spat with Fox's Megyn Kelly that began with her asking him at the first debate about calling women names. Trump then launched a series of insults at the TV anchor.

Paul is wading into the matter, too.

He said Tuesday, "If Trump keeps up his sophomoric insults, particularly of women ... and I think if he does that directly to a woman on stage, I think it'll be the beginning of the end."

He's no wonk. He communicates ideas mostly in boasts and hyperbole. But by the time Trump takes the stage Wednesday night, he will have released two proposals on major public policy topics — and could be pressed to defend the details.

Last month, he outlined proposals to deny citizenship to U.S.-born babies of immigrants living in the United States illegally as part of an immigration plan. Emphasizing border security and millions of deportations, he also says he would build a wall along the U.S. southern border and force Mexico to pay for it. Those proposals, and his comments suggesting that Mexicans coming across the border are largely "criminals and rapists," have angered a population group national Republicans see as critical to the party's success.

And on the eve of Wednesday's debate, he appeared aboard the U.S.S. Iowa, where he called for a military buildup so broad that he says no foe would challenge the U.S., as well as a new health care deal for veterans.