DALLAS - Hours of an off-and-on light rain has caused an icy mess for wide swaths of North Texas.

Temperatures were below freezing Thursday morning and many districts either cancelled classes altogether or shifted to online-only learning due to the ice.

FOX4’s Evan Andrews said the rain still moving through the area is falling into a freezing atmosphere – liquid when it starts but freezing by the time it hits the ground.

Temperatures were below freezing Thursday morning, with most people around 25 degrees. That means the thin coat of ice that is on area roads will cause problems throughout the first part of the day

Icy showers should exit the area by 9 a.m., but as much as 30 percent of the area could see additional freezing rain later this afternoon.

It’s a tossup if North Texas gets above freezing on Thursday, with a forecasted high of just 32.

Sunday night into Monday there are many signs of a storm that will produce snow with very cold temperatures.

There were countless wrecks and closures on major highways and interstates across the region on Thursday morning.

Ice formed on an elevated section of Interstate 45 over Lamar Street and drivers could not stop, leading to a chain-reaction crash involving almost 20 cars and trucks south of downtown Dallas. 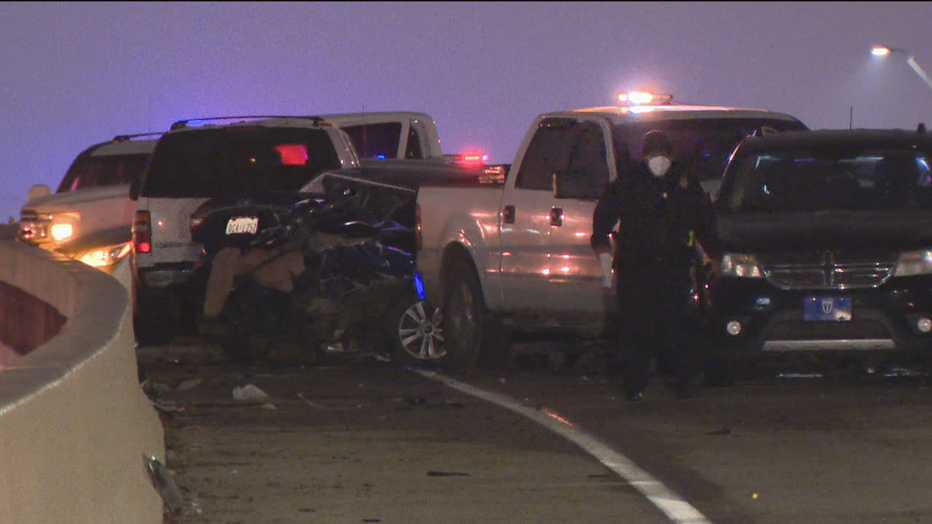 One man who got out of his vehicle to look at the damage was hit by another vehicle. He died at a Dallas hospital.

More than 50 vehicles were involved in a massive ice-related wreck Thursday morning on Interstate 35W in Fort Worth.

The incident shuttered both northbound and southbound traffic on I-35 near Northside Drive.

Fort Worth Fire officials said there were numerous injuries due to the series of collisions and first responders were checking on people in each vehicle involved.

A crash on eastbound Interstate 30 at Summit closed all lanes to traffic for more than three hours before reopening.

The two largest districts in the area went to virtual learning while other big districts cancelled classes altogether.

Many school districts are closed Thursday due to the winter weather, but some are not and others are holding classes online.

Allen, Arlington, Garland, Mesquite, Plano and Richardson ISD’s are among the many who will not hold classes on Thursday.

Dallas and Fort Worth ISD are online instruction only.

Most school districts made the decision to close by 6 a.m. Thursday.

One notable exception is Frisco ISD. No change was posted on its website or posted on social media, so it appears that classes were still on.