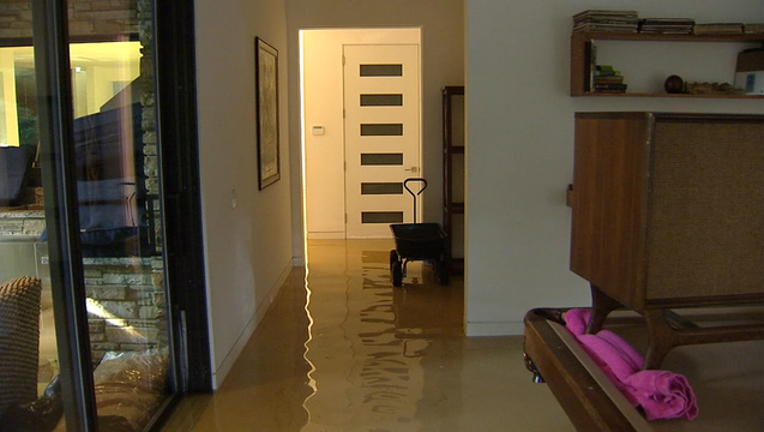 DALLAS (AP) - Deb Eberhart couldn't sleep and was easily moved to tears as she worked to coordinate repairs to her Houston home in the months after flooding from Hurricane Harvey besieged it with 3-feet of water.

She clenched her jaw so hard that it hurt. She couldn't eat.

"I thought: 'Well, I'm not handling things as well as I should be,'" the 69-year-old retired teacher said.

Eberhart realized she needed help that had nothing to do with construction crews and insurance adjustors. So she joined storm survivors seeking help from therapists in the wake of the destructive winds and heavy rains in August that caused more than 80 deaths and an estimated $150 billion in damage in Texas.

Experts say the emotional distress caused by such an event can take many forms - grief, anxiety, depression, even fear of storms - and progress through several stages over a year or longer. Even months after the storm hit, new patients have been coming to free counseling being offered by private and government-funded programs.

In the small coastal town of Port Aransas, which experienced major destruction after Harvey made landfall nearby, psychologist Andrew Reichert said he began noticing a shift about a month ago in what was bringing people in.

"It's gone from kind of the immediate stress and shock to more just kind of a chronic stress and long-haul type of thing," Reichert said. "A lot of my work is helping people prioritize and focus on what they can control versus what they can't."

Eberhart headed to Austin before the storm hit, even though she thought her Houston home would be fine. She later received photos of the flooding at her house from a neighbor who used a boat. When she returned home, she was heartbroken by what she found: "Mud and slush, and everything just gone."

She lived with her son and his roommates in Houston for about three weeks, then she moved into a starkly furnished apartment near her home. The stress increased amid the frustrations of being displaced, remodeling work and the grief from losing irreplaceable items such as furniture that belonged to her mother and childhood photographs.

"I think after a while you just have to accept the fact that maybe you're just stuck in a place, and somebody can just get you over the hump and it would be a therapist," Eberhart said.

She had her first counseling session in November with Judith Andrews, a psychologist who co-chairs the Texas Psychological Association's disaster resource network. Eberhart said talking to Andrews helped her realize she shouldn't be mad at herself for still being upset and that she needed to takes steps to deal with the stress, such as starting to exercise again.

Andrews, whose organization is offering free counseling sessions, said survivors feel grief over the loss of both property and stability. "They're grieving about the loss of what was," she said.

They usually first experience the survival-focused "heroic phase," when people are responding with high intensity, helping others to survive or being rescued, Andrews said. A few weeks later comes the "honeymoon" phase, which can last up to six months as people are buoyed by feelings of solidarity and bonding from their shared experience.

But anger, resentment and feelings of isolation and abandonment can creep in during the "disillusionment" phase, when survivors struggle to rebuild. The "reconstruction" phase follows - and can last for years - as victims learn to accept that everything won't be the same.

"What happens when people don't process it by talking, then they really don't get rid of it," Andrews said. She noted that most people won't need long-term counseling but many "would certainly benefit by short-term therapy."

The Texas Education Agency is heading a task force to mobilize the mental health response in schools. One goal is to help teachers understand how to spot children who might benefit from talking to someone, said Andy Keller, a psychologist and president and chief executive officer of the Meadows Mental Health Policy Institute, which is collaborating with the state on task force.

Megan Davis took her 3-year-old and 6-year-old daughters - who escaped their Houston home by boat with their mother - to sessions with Andrews to make sure the girls were OK.

Davis said she was encouraged to hear her girls were "age-appropriately handling the large changes in their lives." The 34-year-old attorney said she also was given tools to talk to her daughters and to know how to let them guide the conversation.

"I think that oftentimes we focus on the immediate effects of disasters, and that's really a small portion of what's important in terms of looking at mental health, especially with respect to kids," said Jeff Temple, a psychologist at The University of Texas Medical Branch in Galveston.

The Texas Health and Human Services Commission has been working with mental health care providers to offer free counseling across affected areas in Texas until Jan. 24 through a grant from the Federal Emergency Management Agency. The state has applied for additional funds to extend the services.