Fort Worth is one of 19 cities across America chosen to host the Honor Walk Ceremony and display the 9/11 art exhibit.

FORT WORTH, Texas - In commemoration of the 20th anniversary of the 9/11 attacks, the city of Fort Worth is remembering and honoring fallen Texas heroes.

Fort Worth is one of 19 cities across America chosen to host the Honor Walk Ceremony and display the 9/11 art exhibit.

That exhibit is at the Fort Worth Museum of Science and History, and will be on display until July 23.

An honor walk was held Friday to commemorate lives lost and changed forever because of 9/11, like 16-year veteran Fort Worth Fire Department Captain Gregory Dykes.

"I was riding the subway train from Brooklyn into the city," Dykes recalled.

He was a film student in New York on September 11, 2001, but his experiences during the terror attack made him instead choose a life of public service.

"In terms of the fire department, watching those guys and what they did up there in the aftermath, that stuck with me and that’s how I ended up back in Texas getting involved in the fire service and ending up in Fort Worth," Dykes explained. 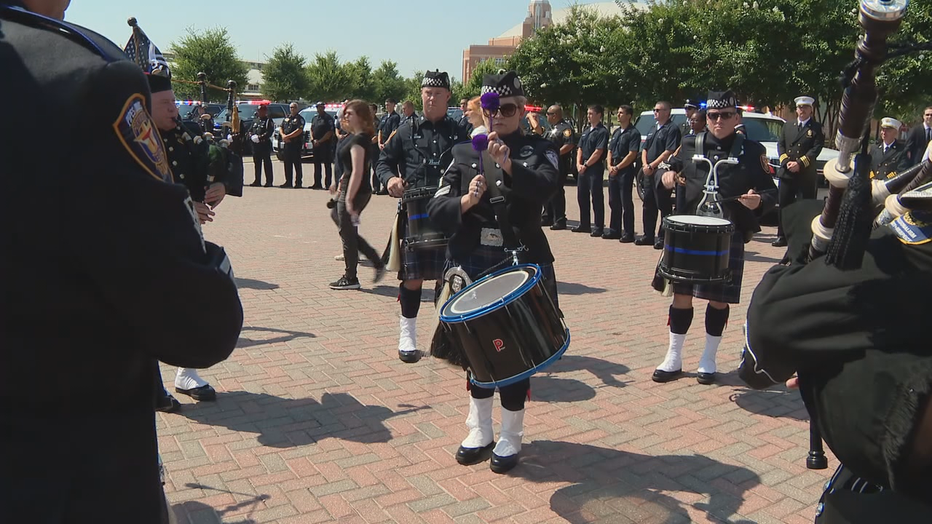 Multiple agencies gathered Friday for the traveling 9/11 exhibit. It’s the work of a 19-year-old volunteer firefighter in the Netherlands who was captivated by a documentary on the attack.

"He started building the replica when he was 14 years old in 2015, and it took him three-and-a-half years to build the replica. 10,000 hours," one speaker said.

Fort Worth’s Museum of Science and History was the latest home on a 21 U.S. city tour to mark the 20th year since the massive terror attack.

It is the only Texas city on the tour.

"And round the entire perimeter are the names of the fallen, of the 2977, plus the six who died in the World Trade Center bombing on February 26 of 1993," a speaker said.

"The sacrifice was a catalyst for change that we are the beneficiaries of today," Fort Worth Fire Chief James Davis said.

Captain Dykes was honored with a living firefighter award for his service.

After a month in Fort Worth, Columbus, Ohio is the next stop for the exhibit. It will end on 9/11 in New York.