A bill initially passed by the state House earlier this month was approved with minor revisions by the Senate Thursday.

If the House approves those revisions, the bill will head to the governor’s desk, and that will affect Dallas’ growing homeless population as lawmakers are working to ban encampments on public property throughout the Lone Star State.

[REPORTER: "What would you say keeps you from going to a shelter?"]

"Being locked up," Sherlene Griffith responded. "You can’t do what you want, when you want."

Griffith lives in a tent just outside of Downtown Dallas.

She admits that many living like her have struggles.

Still, she said she chooses this life.

"It’s hard, but it’s not hard. It’s only as hard as you make it," Griffith said. 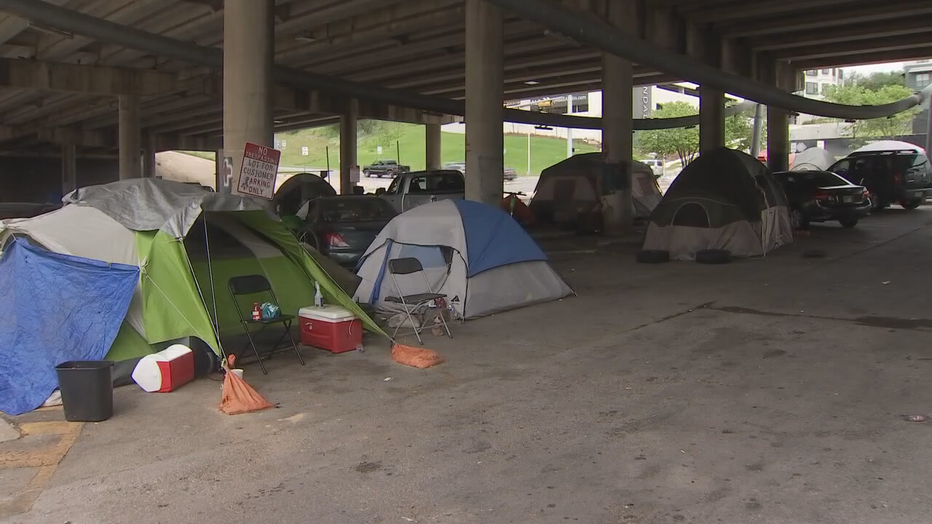 "The number of people experiencing homelessness is on the constant rise," said Pastor Wayne Walker, CEO of Our Calling. "Our growth rate is actually growing faster than New York and LA."

Pastor Walker runs the homeless ministry and non-profit Our Calling.

"In Dallas, because of COVID, we only have about 1,600-1,700 shelter beds, but we have thousands of people out here now on the streets. We get homeless encampments reported to us on a daily basis," Walker explained. "We’ve seen more new homeless people, January through April this year, than we did all of 2020."

"Where do you send people when all the shelters are full? Which, they all are. We know we don’t want to see people camping on the streets, but we also don’t want to live in a city where people have to camp on the streets because there isn’t enough room," he said.

He also believes it’ll be a distraction for law enforcement.

"You think about our biggest crime issues right now. We have a nurse rate that’s pretty crazy. We have lots of other violent crimes happening in the city. I don’t think we want to pull police officers off of actually fighting crime to write tickets, right, to someone that’s sleeping outside," Walker added.

Lawmakers said the bill is not meant to put people in jail, but, if approved, illegal camping would be punishable by a fine of up to $500.

The bill was launched because of homelessness issues in Austin. Ultimately, it’s up to the governor to sign off on the bill.

Even some experiencing homelessness say encampments aren’t ideal, and not just for ones living there.

Tim Uhler said he understand that some people might consider encampments a nuisance, and even agrees with that, but that there’s not a better solution at this moment in time.

But others said it’s their preferred option. Some said they are aware, and uneasy, of the bill.

Carl Hodge said he doesn’t know where he would go, though he currently lives in his car after giving his tent to another person who was worse off than him.

Those at Our Calling believe now is a time of opportunity.

"How do we create a solution rather than cause more problems?" Pastor Walker said. "We need to be focused on bigger issues like infrastructure issues and how do we get people into housing."

While the ones living at encampment sites just want to be humanized.

[REPORTER: "How would you describe the people who live [in homeless encampments?"]

"Most of them are real, caring people," Griffith responded.