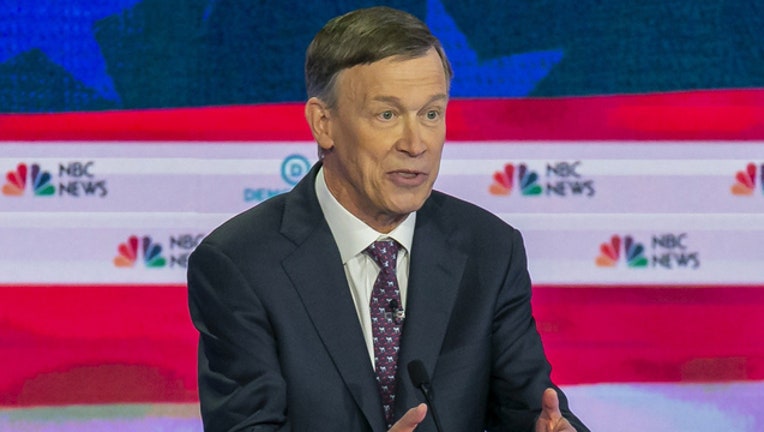 DENVER (AP) - John Hickenlooper has refused to yield to pressure from his team to scrap his presidential campaign and instead run for a Senate seat in Colorado.

The former two-term Colorado governor is struggling to break through a crowded field of Democratic presidential candidates. He's in the bottom tier of polling, hasn't generated significant fundraising and is at risk of being eliminated from the fall debates.

The discussion about exiting the race was described by a Democrat familiar with the situation who spoke on condition of anonymity to discuss internal strategy. Politico first reported the conversations.

While Hickenlooper's presidential campaign is facing steep hurdles, a Senate bid might not be much easier. A dozen Democrats have already announced challenges to Republican Sen. Cory Gardner. Two announced this week that they raised more than $1 million in the past quarter, more than Hickenlooper is thought to have raised for his presidential bid over the same period.

Hickenlooper, a brewpub owner-turned-politician, launched his White House campaign in March. The future of his candidacy is under scrutiny as his campaign undergoes a major shakeup .

Campaign manager Brad Komar and national finance director Dan Sorenson have left the campaign. Spokeswoman Lauren Hitt confirmed their departures and said she, too, will exit the campaign in the coming weeks.

The departures come after the close of the second quarter of campaign fundraising. Hickenlooper is expected to lag well behind the Democratic National Committee's benchmark of 130,000 donors needed to qualify for the debate stage in September. He is one of many candidates who could fail to meet that threshold.

Hickenlooper has tried to establish himself as a leading moderate in the race, repeatedly warning Democrats they risk being tagged as socialists by tacking too far to the left.

But with several candidates, and many Democratic voters, embracing more liberal positions, Hickenlooper's message - or at least the messenger - has failed to resonate. He was roundly booed last month at the California Democratic Party convention when he condemned socialism.

Hickenlooper's team projected optimism about the future, announcing that the candidate had hired a new campaign manager, M.E. Smith.

Sorenson's departure had been in the works for some time. He previously notified the campaign that he intended to leave but stayed on until the end of the second fundraising quarter, according to a person with knowledge of the situation. The person spoke on condition of anonymity to discuss sensitive matters.