The hot and dry weather across Texas has helped fuel several big wildfires. The state has raised its preparedness level to the highest level to make resources available on short notice.

ALBUQUERQUE, N.M. - More than 5,000 firefighters battled multiple wildland blazes in dry, windy weather across the Southwest on Thursday, including a fire that has destroyed dozens of structures in west Texas and another that's picking up steam again in New Mexico.

Evacuation orders remained in place for residents near the wildfires in Texas, Colorado and New Mexico. High winds prevented officials from sending aircraft to drop retardant or water in many places.

Dangerous fire weather fueled by gusty winds, high temperatures and extremely low humidity was predicted to continue through Friday — especially in New Mexico, where the largest U.S. wildfire has burned for more than a month and the governor expects the number of structures destroyed will exceed 1,000.

READ MORE: Deputy dies while trying to save people from Eastland County wildfires 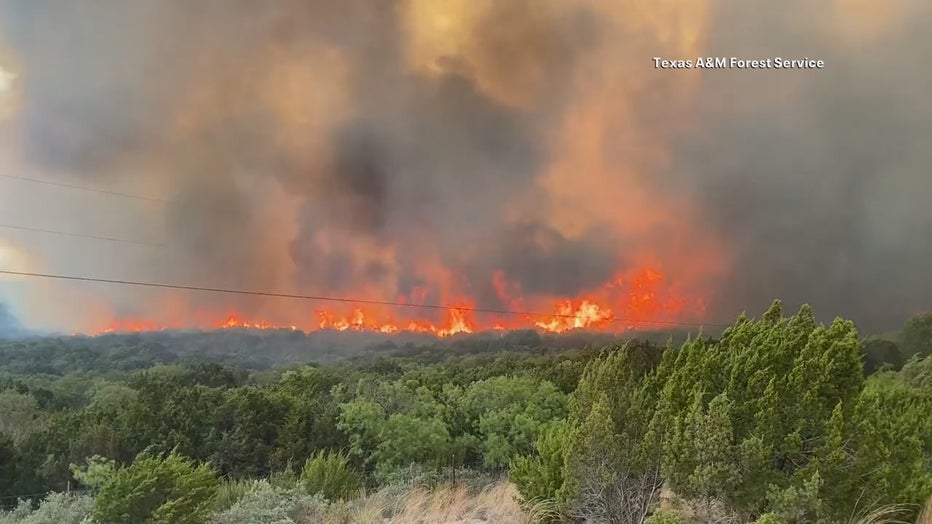 Fire officials said ground crews worked hard to keep the most active flames in check at the fire in a region between Santa Fe and Taos.

Winds gusting up to 50 mph (80 kmp) were expected Friday before easing into the weekend when cooler temperatures also should provide some relief, Turner said.

More than 2,100 fire personnel were fighting that blaze, which has burned more than 473 square miles (1,225 square kilometers) of timber and brush in a region east of Santa Fe and south of Taos.

Only about one-third of the fire's perimeter is estimated contained. But fire operations chief Carl Schwope said crews quickly snuffed out out new fires sparked by embers blowing ahead of the main blaze in steep, rugged terrain.

"Aircraft got shut down early because of high winds, so they are there on their own," Schwope said. "Across this entire fire area, things are looking really favorable — a lot better than we had expected it to look at his time yesterday."

He added: "It doesn't mean we didn't have fire growth today and we are definitely going to see more fire movement tomorrow. But as of now, things are looking really good."

Almost universally, scientists agree that climate change is affecting us in ways that may surprise you. It's not a surprise to Texas Tribune environmental reporter Erin Douglas. She talked to Good Day about her latest story on extreme weather, water scarcity and the risk of illness.

In Texas, the Texas A&M Forestry Service said the fire that has burned dozens of homes was still only 5% contained Thursday afternoon after charring more than 15 square miles (39 square kilometers) of juniper and mesquite brush 18 miles (29 km) southwest of Abilene.

That fire had prompted the evacuation of the historic town of Buffalo Gap on Wednesday. Forestry Service spokesman Stuart Morris said the town had reopened Thursday and that no injuries had been reported, but 27 structures had been destroyed.

Morris said in an email Thursday night that a post-fire assessment team was working to document what kind of structures were destroyed and that it was not yet clear how many were residences.

All of West Texas was under a red flag wildfire danger warning Thursday, with an underlying drought and critically to extremely dry vegetation combining with 100-degree temperatures Fahrenheit (38 Celsius) and gusty winds.

However, the Forestry Service said a new weather pattern by the weekend is expected to usher in cooler temperatures and moisture that could limit potential for wildfire activity on Saturday and Sunday.

Wildfires have broken out this spring earlier than usual across multiple states in the western U.S., where climate change and an enduring drought are fanning the frequency and intensity of forest and grassland fires.