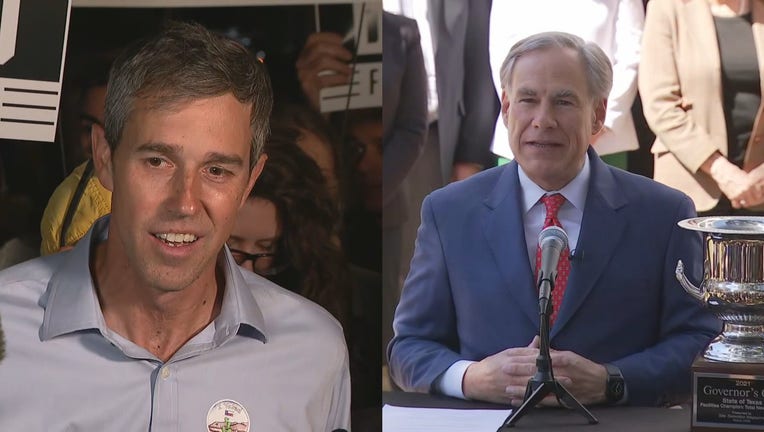 Incumbent Republican Governor Greg Abbott and Beto O'Rourke are set to face off in the November election for Texas governor after they won their party's primary election.

Abbott easily won the Republican Party nod in his bid for a third term. He faced two high-profile challengers from the far right wing of his party – former state Republican Party chair Allen West and former State Sen. Don Huffines of Dallas. But he won more than 65% of the vote, easily avoiding a runoff.

Beto O'Rourke had an easy primary election win with more than 90% of the vote. His watch party was here in North Texas.

Democrats have officially made Beto O'Rourke their nominee for Texas governor and latest hope of ending decades of losses in the nation's biggest red state.

O'Rourke had no serious primary competition and got more than 90% of the vote.

O’Rouke held a watch party in Fort Worth and he appeared on stage with his wife and kids. This was their one campaign event together as a family.

He said it was important to have his election night party in Tarrant County — a traditionally red county — which he won in 2018 against Ted Cruz, and which voted narrowly for President Joe Biden in 2020.

There were a couple hundred people who turned up for the campaign party here in downtown Fort Worth.

Though no Democrat has won statewide office in Texas in nearly 30 years, O'Rourke was quick to turn his attention to beating Abbott in November.

"I have not spent a dime and Gov. Abbott has spent a lot of money on TV ads in every media market in this state. His margin is shrinking, my margin has stayed the same," O’Rourke said. "As we continue to deploy volunteers and continue to raise money with 150,000 grassroots donors so far, and deploy people across the state, we're going to be able to close that margin and overcome it."

O’Rourke credits a lot of his success to the some 50,000 volunteers statewide who knocked on doors in the months leading up to Tuesday to get people out to vote.

Gov. Abbott fends off challengers in Republican primary for governor

Republican Gov. Greg Abbott is again his party's nominee after a commanding win over a band of challengers from the far right, including Allen West -- a former Florida congressman.

Republican Gov. Greg Abbott is again his party's nominee after a commanding win over a band of challengers from the far right, including Allen West -- a former Florida congressman.

Abbott is running for a third term, but the fact that the 64-year-old governor even drew primary challengers underscored his disapproval within the GOP's activist wing.

West, who moved to suburban Dallas after serving one term in Congress as a tea party firebrand in Florida, stepped down as chairman of the Texas GOP to run for governor. He and other challengers had bet that anger within the party's grassroots over Abbott's handling of the pandemic -- including a mask mandate in 2020 -- could catapult their long shot candidacies.

But Abbott, who had former President Donald Trump's endorsement, all but ignored them. He enters the general election with more than $50 million to spend, a formidable campaign account that ranks among the largest of any governor in the country.