A Greenville woman is reunited with her beloved dog. She rewarded the person who helped get her back, and that person is paying it forward.

GREENVILLE, Texas - A Greenville woman is reunited with her beloved dog.

She rewarded the person who helped get her back, and that person is paying it forward.

Bernita Echols’ 11-year-old Yorkie, Cinderella - Cindy for short – is so much more than a pet.

The sweet three-and-a-half-pound companion is a connection to her husband, who passed away from COVID-19 in January.

"She loved me, but she was over the moon for him," Echols said. "They was best friends, tight, did pretty much everything around the house together."

On Sunday, Echols took the dog to her Greenville office to catch up on some work.

She let Cindy out to do her business, as she’d done many times before, but when she returned a few minutes later, Cindy was gone, and then panic set in.

"Within 15 to 20 minutes, everyone was here searching for her, going through the trees," she said.

They were unable to find Cindy.

About half a mile and two busy roads away, Brittany Foster, manager of Minty Carwash, spotted the dog. 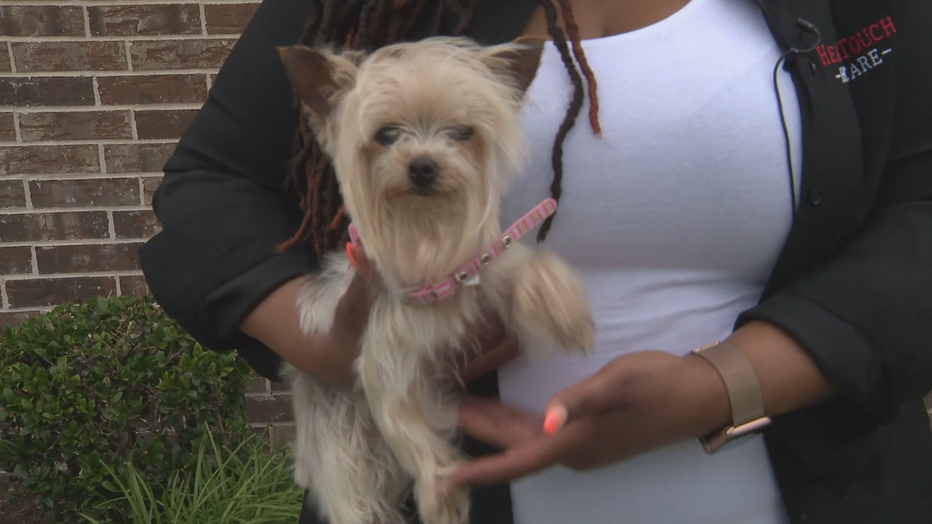 Concerned for the dog’s safety, a customer took Cindy home.

The next day, Foster saw Echol’s posts on Facebook.

She double checked surveillance footage to make sure it was the same missing dog and reached out to Echols.

They were even able to track down the customer who returned the dog, and Echols cut the $1,000 check, grateful for Foster’s help.

"We weren’t really concerned about the check. I told them just send me a pic of the dog being at home," Foster said.

Foster said says she certainly could have used that money herself, but instead she made other plans.

"She immediately said she was going to cash it and put it in the tip jar," Echols said.

Foster said they’ve all taken a hit with so much rain lately, and she’s sharing the money with staff.

"I would want somebody to do the same for me," Foster said.

"There’s good people out there that don’t mind helping you," Echols said. "I really felt like it was God saying I’m going to bring her back so you won’t be alone."