Grapevine police are looking for the suspect, Cesar Soto, 33, who got away with the Uber driver’s car.

GRAPEVINE, Texas - An Uber driver who was stabbed multiple times says he barely survived the seemingly unprovoked attack in Grapevine.

Carlton Bryant said it will take several weeks for his recovery but he’s thankful he was able to make it out of that car alive that day. Grapevine police have released a photo of the suspect, Cesar Soto, 33.

"I get kind of paranoid and shaky when I talk about it now," Bryant said in an interview with FOX4.

He did not want to show his face but did share his story to warn others.

He’s been driving for Uber about two and a half months to help support his family. He picked up a man in Lewisville headed for DFW Airport around 6 a.m. on May 13. Bryant says during the ride the man, who was wearing construction gear, seemed to be upset and talking about his relationship problems.

Nothing seemed out of the ordinary until the passenger asked to stop at a gas station, then changed the destination to a location near the Amli apartments on Dallas Road in Grapevine. 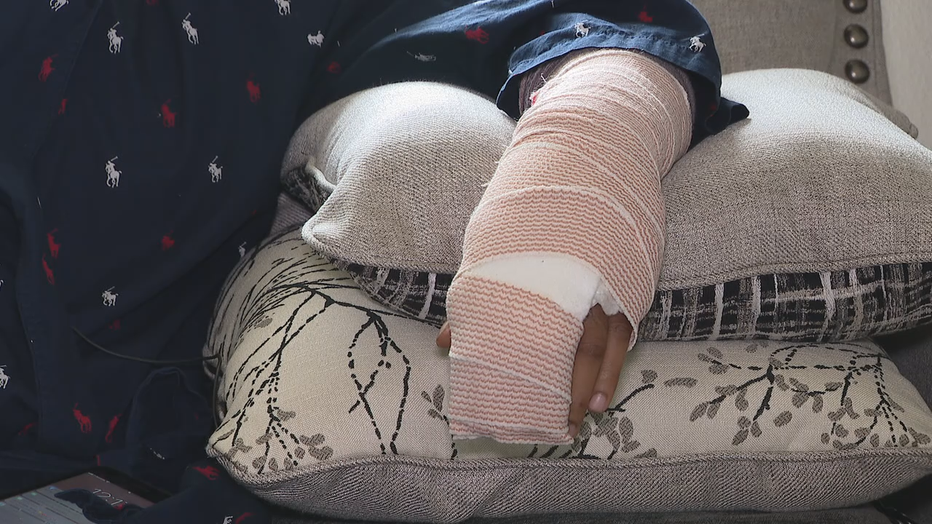 "As soon as I put it in park, that’s when he exploded to the front, grabbed me by the head with his left hand," Bryant said. "I could see in the rearview (mirror) his right hand coming towards me, it’s a knife."

Surveillance video at the apartment complex captured some of the attack. Video shows Bryant exiting the vehicle, then briefly struggling with the suspect, Soto. Bryant says in those moments of terror he thought he was going to die.

In total, Bryant says he was stabbed about eight times.

"In my armpit, in the back, my arm over here and this is the hand that tried to stop the blade," he said.

Bryant got help from a bystander who called 911.

Police recovered his stolen car in Colleyville with the knife and Bryant’s belongings still inside.

"I don’t think he had intentions of stealing a vehicle or taking money or anything. I just think he woke up with something violent on his mind and whoever his driver was he was going to try to hurt them or kill them," Bryant said. "I don’t even know if he cares or if he has a conscience, or if he feels any type of guilt or remorse. But I would like to see him again and let him know, God was more on my side."

Bryant went through surgery to repair his hand and says his doctors have told him it’ll take about nine weeks for his wounds to heal. He’ll also have to go through physical therapy to regain movement in his hand.

Police say they are still actively looking for Soto.