The governor is calling the situation at the border a crisis. He says cartels are ramping up drug trafficking and human smuggling. Children are coming in,&nbsp;in record numbers.

The governor is calling the situation at the border a crisis. He says cartels are ramping up drug trafficking and human smuggling. Children are coming in, in record numbers.

Abbott spoke to reporters from Mission, Texas, Tuesday after taking an aerial tour of the Texas-Mexico border with the director of the Texas DPS and the Texas National Guard. 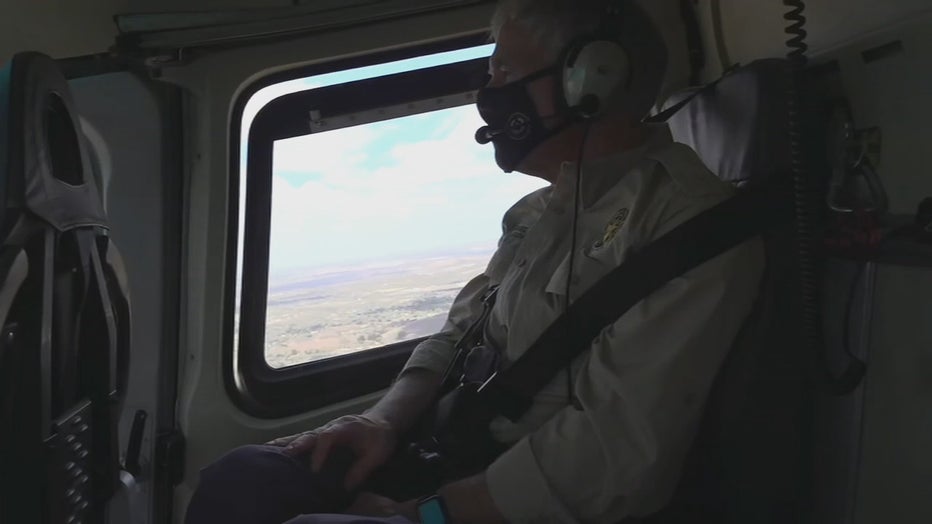 "As we were flying over the region, we did see people crossing over the border illegally," the governor said.

"It's about crime prevention, and the best way you do that is at the river with highly visible resources troopers tactical boats," said Texas DPS Director Steve McCraw.

"We are going to be in support of TX DPS. We'll be doing observation posts along the area," said Texas National Guard Major General Tracy Norris.

Gov. Abbott says Border Patrol agents are seeing a massive jump in the number of unaccompanied minors crossing into Texas.

According to the McAllen Monitor, 11,700 children crossed the border at the Rio Grande Valley between October 2020 and March 2021. It was a 121% jump from the same period a year earlier.

Abbott blames the Biden administration's immigration policies for the jump.

"It invites illegal immigration and is creating a humanitarian crisis in Texas right now," Abbott said.

White House Press Secretary Jen Psaki would not confirm the numbers. And like the homeland security secretary, she stopped short of calling the border issue a crisis.

"We've been very clear there is an increase. More children coming across the border than we have facilities for at this time," she said. "I don't think we need to put new labels on what we already conveyed is challenging what is a top priority for our president."

"This is not the time to come that the majority of people who come to the border will be turned away," she said.

While Border Patrol is in charge of detaining illegal immigrants, ICE is the federal agency that houses them, and its facilities are overwhelmed.

Gov. Abbott is demanding the White House provide funding to ICE to open and operate additional holding facilities. He also says it’s the federal government's responsibility to pay for and provide COVID testing to detainees.

"Secure the border. Period," he said.

Gov. Abbott is expecting migrant numbers to triple or quadruple in coming weeks in the Rio Grande Valley alone. He is also demanding the White House provide additional funding for judges and magistrates to hear cases at the border.